First up, my string progress for April.  I had every intention of completing my four blocks for April well before the month ended, yet this was the state of things last evening before closing up shop for the night. 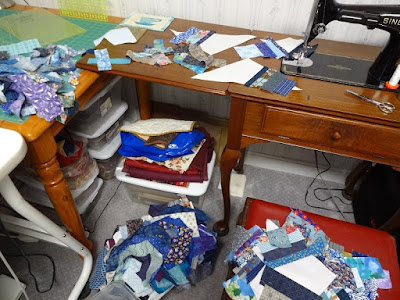 There was more out of camera range ...

This morning the block segments were trimmed and added to the design wall in no particular order, but not stitched together yet.  At this point I think I'll leave them unstitched until all the segments are sewn (another 3 months) in case some need to be moved around for a more pleasing arrangement. 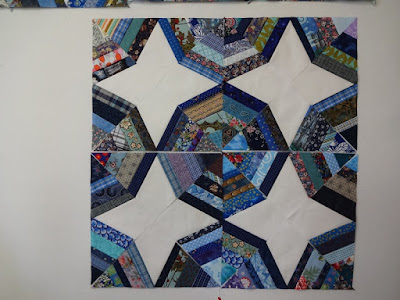 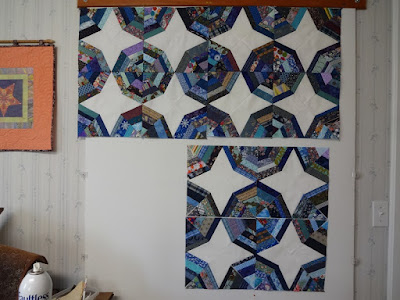 All blocks made thus far, looking a bit oddly weird with that bit of space
between the top row and April's unsewn segments

Linking up with Lori at Humble Quilts 2019 Stringalong.   Only three more months until I can start thinking about borders for this quilt.  A piano key outer border maybe?  There are plenty more strings where these came from - the blue strings are multiplying in volume rather than decreasing!  How does that happen?

Meanwhile, I'll leave you with a sneak peek at the project/squirrel that inserted itself into the quilty lineup mid-month, and is taking center stage until its completion, very soon I hope.  This little squirrel is going to a deserving cause, so it's all good. 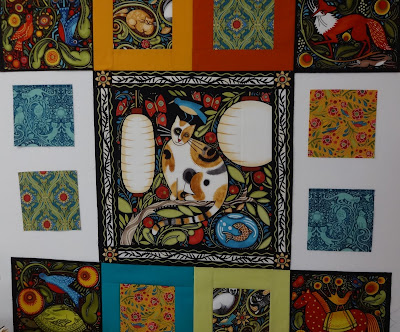 Posted by Quilting Babcia at 2:27 PM

Email ThisBlogThis!Share to TwitterShare to FacebookShare to Pinterest
Labels: Stringalong 2019