So a week ago I awoke with excruciating lower back and leg pain, but it was quilt group day, so of course you know what I did, lol!   A visit to the chiropractor the next day revealed a twisted tailbone and impingement of the sciatic nerve.  And how did that happen?  No clue, but four visits later it seems to be improving slowly.  Either that or I'm just adapting to the pain, with the help of some over the counter anti-inflammatories and some mild pain meds.

Anyhow, during this hiaitus, about the only chair comfortable enough to sit on was a dining room chair, so I parked the faithful little featherweight on the table and began piecing nine-patch blocks.  These fabrics were donated to our quilt ministry a year or so ago from an anonymous friend, and have patiently awaited their destiny.  There was a fat quarter bundle of lovely deep shades of shot cotton and small yardages of Kaffe Fassett prints.    I'd never tried a disappearing nine-patch before, in fact had only ever seen one recently, so it seemed easy enough and not too complicated that the back pain would interfere with assembling the top in a coherent manner.  Hmm, have 'disappearing nine-patch' and 'coherent' ever been used in the same sentence before?  Hehe! After determining I could wrangle enough pieces for 20 blocks of the featured floral if I made the pieces 5" square, I set about cutting up the fabric, and this is the result. 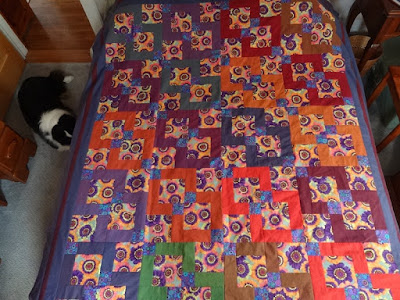 Pretty wild, huh? You'll have to take my word for it, the colors are FAR lovelier than depicted in my poor photo attempts.  Especially the shot cottons, which are just beautiful in their own right.  The following close-ups provide a little better color rendition, though not perfect by far. 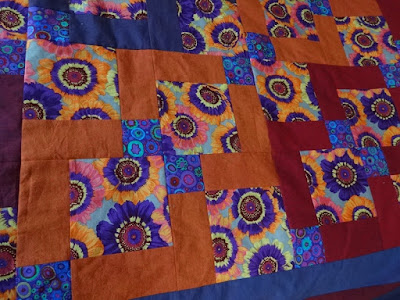 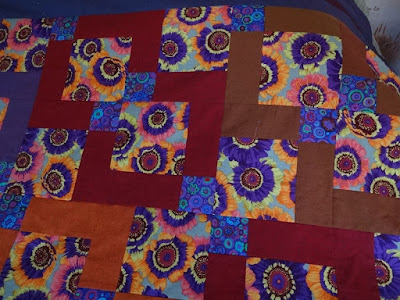 So, this top measures 67 x 80 inches, and is slated to join a group of quilts our group will be donating for the church camp's annual benefit auction over Labor Day weekend.  My sweet hubby who favors deep greens and browns and is generally not a fan of wild color combos thinks this top is pretty cool, so if auction-goers don't get super-excited, it may end up coming home to live with us, who knows? I'll be piecing the back next week, using some of the left-over yardage and another 'coordinating' print - coordinating with the dark shot cottons at least!

I also began another mindless piecing project over the past few days, and will post when there's more to show.  Right now it consists of a few hundred semi-pieced 4-patch blocks, with alternate blocks yet to be cut and assembled.  Fun bright fabrics, with a plain white background, another auction donation quilt in the making.  More later.

I'm happy to say after four adjustments by our chiropractor, including one this morning, things are beginning to look up, and hopefully if I don't move or twist incorrectly the back will be back to some semblance of normal before too many more days.   The interesting thing is, since my back went out, the wrist doesn't hurt a bit!  Guess I'd best get back to some FMQ while that lasts! 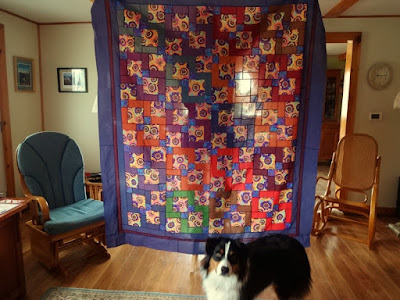 One of our quilt ministry members donated some fabrics recently, and included in the box were these cut-offs and remnants from one of her recent quilts. 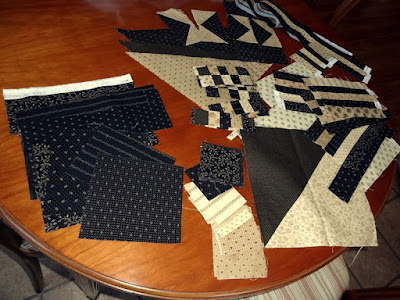 To give you some idea of the size of the scrap pieces, the little squares and strips measure 1" finished, the larger black print square at the front about 6-1/2 inches.  On a whim I decided to take this batch home last week and see what they might become.  During spare moments over the weekend and today, my handy seam ripper and sewing machine reconfigured some of the scraps into 9-patch blocks that eventually became this little doll quilt top. 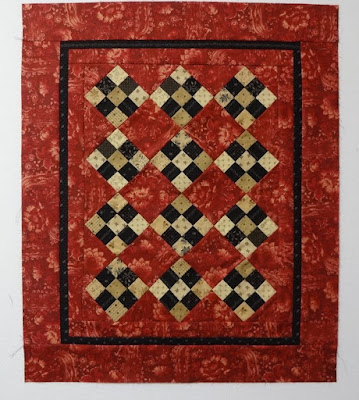 More than a little wonky since I didn't bother to square up anything as I went along.  In the beginning I'd planned to just use Lois's scraps for the top, but eventually decided there just wasn't enough of anything to make a good background for the 9-patches, and this off-red was handy in the stash.  The narrow stop border is made up of three different black prints, and each side has several pieces seamed together to achieve the needed length.  The top measures 20-3/4 by 25 inches, and the 9-patch blocks finish at 3 inches square - more or less ;-) 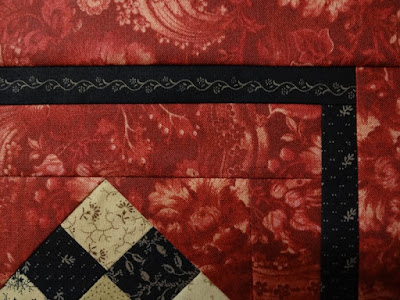 I hardly made a dent in all the little scrappy pieces, so tomorrow the remainder are traveling back to quilt group and I'll put out a challenge to the gang, to see how many doll quilts we can make from the remainder, with the caveat that each person only choose one extra fabric to be used in addition to the scraps while making her top.  I'd love to see this become a round-robin of sorts, though  I wonder how many will take me up on the challenge!

Meanwhile, my hand quilting buddy in the evening.  Sleepy eyes ... 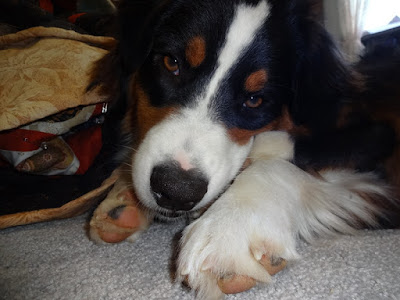 Email ThisBlogThis!Share to TwitterShare to FacebookShare to Pinterest
Labels: Pieced from Lois's Scraps 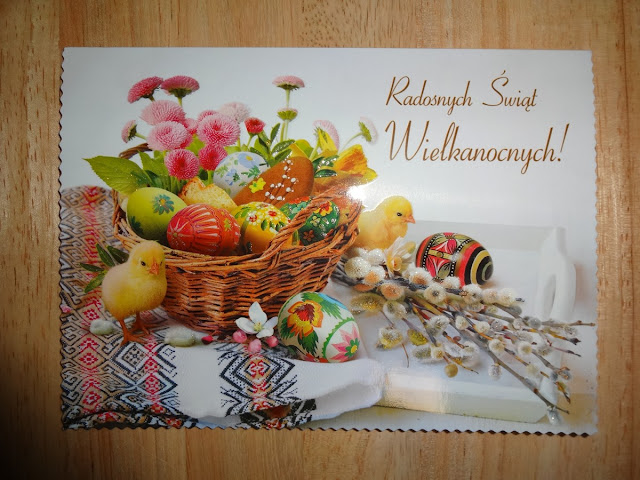