Tutti Frutti is a Finish!

This morning at long last the finishing stitches were put in the binding and I'm calling Tutti Frutti a finish!  Of course there's still the label, but that will be sewn on at Quilt Ministry tomorrow.  For now I'm just basking in the long-awaited thrill of finally having this one finished! 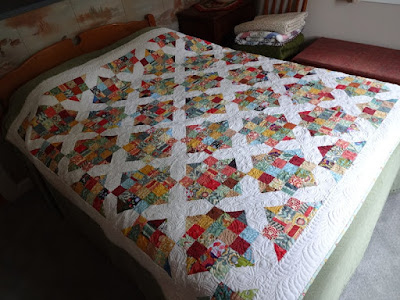 No outdoor glamour shots of this one as we're in the midst of a rainy spell rendering all my favorite areas muddy and unusable.  Pretty gloomy inside this morning as I took these photos. 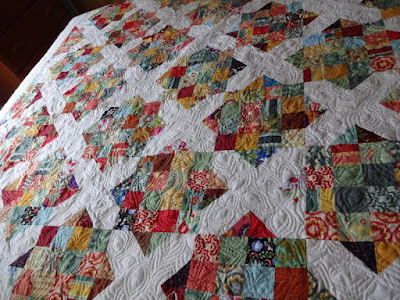 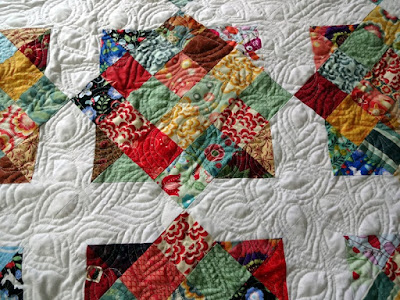 The main portion was quilted with a version of Angela Walters Leafy Meander design.  Fun to do except over those dratted seam intersections where the FMQ foot wanted to bog down.  Toward the end of quilting this portion I discovered a little adjustment on the foot allowing it to rest a bit higher from the fabric surface.  Duh!  Having not paid much attention to the manual that came with the machine I wasn't aware this adjustment even existed, and since the foot had worked well the first couple years my suspicion is that the little adjustment dial was inadvertently moved a smidgeon every time the foot was installed or removed from the machine.  Lesson learned - always refer to the owners manual when difficulties arise - sometimes they are even helpful!!  Ahem ... 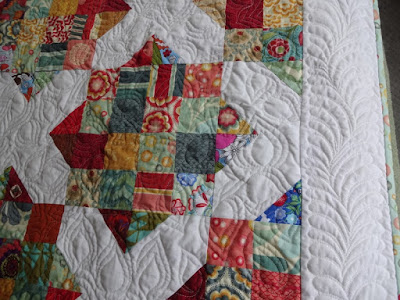 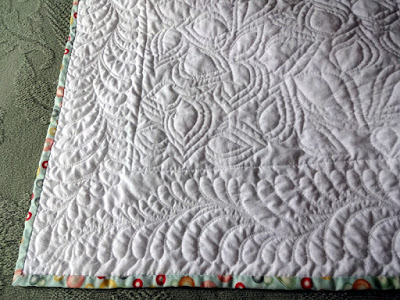 The quilting shows up even more nicely on the back of the quilt that was pieced with leftover slabs of  a couple of the fabrics used on the front. 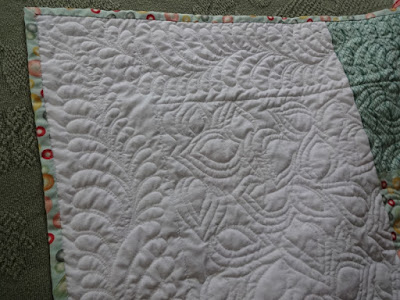 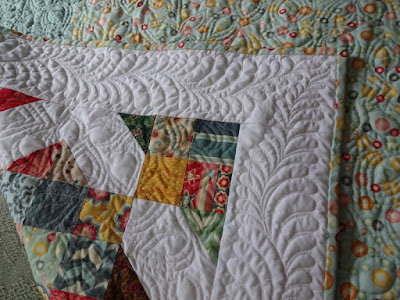 As mentioned in a previous post, this was based on a pattern of the same name from Pam and Nicky Lintott's book Jelly Roll Quilts in a Weekend.  A misnomer in my case as this quilt has been in the works for about three months now!  I added an additional row of blocks and the border to bring the quilt to a more desirable size for the benefit auction.  Fabrics came from a donated fat eighth bundle and my scraps.  I used Hobbs 80-20 cotton-poly batting and quilted this on my domestic Janome 7700 using Aurifil 50 wt. thread for both top and bobbin.  Finished size about 72x72 inches. 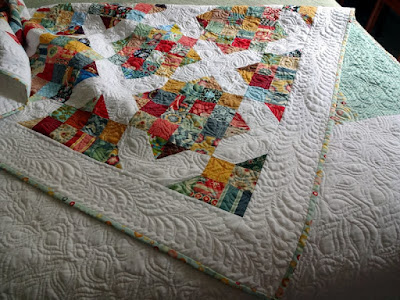 And now -
In other news, a few evenings back this fellow showed up in our side yard garden just before sunset. 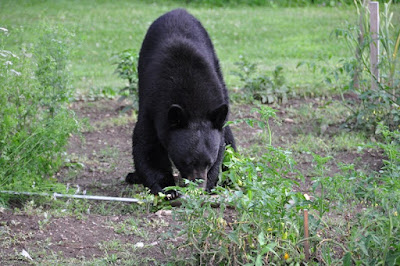 Pulled down the pole holding the finch feeder, crunched it up and was busy eating niger seed when we discovered him. 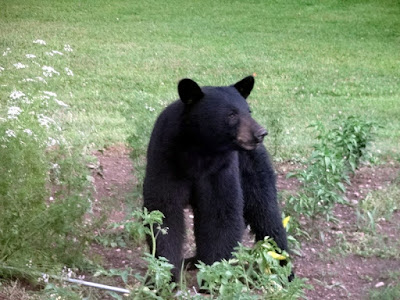 Looking rather proud of himself.  These first two photos are about 20 feet from the house! 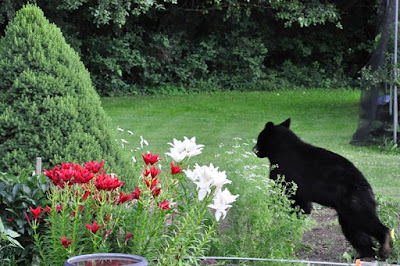 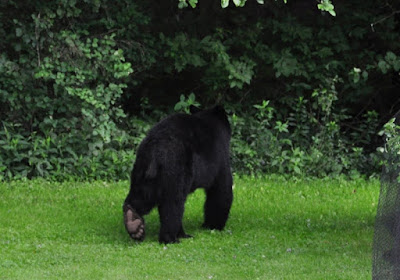 Western New York version of BigFoot!  The blueberry netting is just visible along the right edge of this photo.  Thankfully he headed off to the woods and has left our blueberries alone ... so far.
Posted by Quilting Babcia at 2:37 PM 11 comments:

I probably shouldn't be calling this one a squirrel, cause I actually kind of like it, but .....

A week ago our group was given a big package of painted "quilt blocks" done by campers a few years back, and asked to make quilts from them for this year's auction.  Never mind that it's already July now, and there are probably nearly 200 of said blocks....

We won't be making quilts of all of them since the paint is heavily applied on many of them, and chipping off some of them, others are just blobs of green, brown, and black and blue.  But there are some that have possibilities, as long as we're not trying to actually "quilt" through those blocks.

So, I chose 20 of the blocks and gave them sashings with some recently donated fabric I had left over from another project (yet to be blogged about).  Added a couple borders from another box of donated fabrics, backed the whole thing with leftover pieces of wide backing which I've found to be a bit heavier than regular quilting fabric and hopefully more stable.  Then a quick quilting through all the sashings and borders, adding a machine binding, and voila, done! 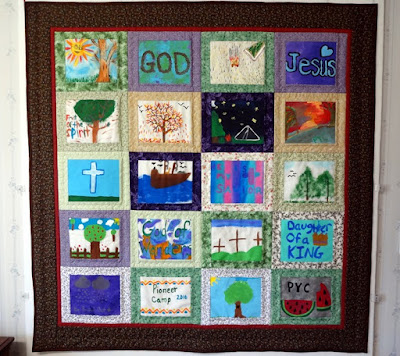 More than a bit of wonk in these blocks - does that make them improv??

Finishing at about 46x47" this should be a good wall hanging size.  I don't think I'd want to go any larger with this, given the stiffness of the blocks from the paint and the chance of chipping off paint on the heavier-coated ones if the fabric is bent during quilting. 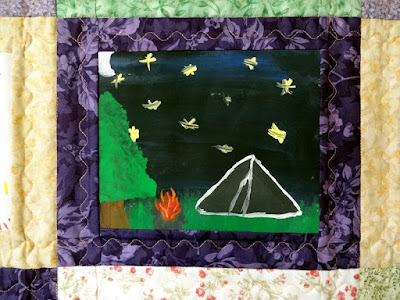 Fireflies!  Of which we have many this month! 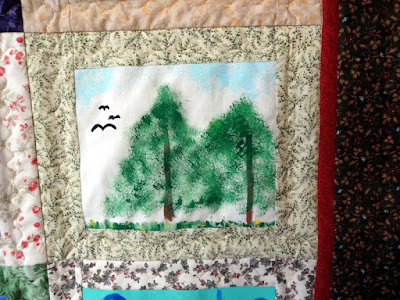 And now it's back to the tedium of machine quilting those larger quilts that don't want to move through the machine in 90 degree high humidity weather.  Looks like we're due for another 5-6 days before this current heat wave breaks.  But we do have something to look forward to late this week when youngest daughter and our 18-month-old grandson arrive for the weekend!

Happy stitching, picnicking, vacationing, and whatever makes you happy over this 4th of July week!
Posted by Quilting Babcia at 7:25 AM 7 comments: