The first mini I ever made

After seeing Kyle's wonderful adaptation of an antique miniquilt yesterday, I was reminded of the first mini quilt I ever made, way back in the mid-late 1980s.  Though I had a few quilts under my belt by that time, being a young mother working in a home-based business and restoring an early 19th century home, etc. etc., there was precious little time left for quilting.

That Christmas, I think it was either 1987 or 1988, we purchased an American Girls doll for our young daughter. With limited funds, there was no money for any of her accessories, so we enlisted the help of my father-in-law to make a copy of Kirsten's bed. At Thanksgiving he brought us the bed, a faithful copy of the one in the catalog, though unpainted. I bought a set of patterns and set about making the doll's entire wardrobe as well as the bedding for the bed.  Bedding consisted of a blue and white ticking mattress and pillow, antique linen sheets and pillowcase made from scraps left in the house by a previous owner, and a quilt. 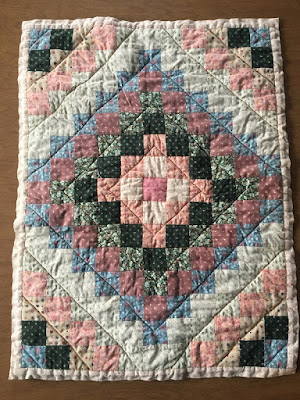 This is the only photo I have of the quilt, taken many years later by my daughter when she was sorting through boxes of her childhood dolls, etc.  The fabrics were scraps left over from making her first big-girl bed quilt a few years earlier, probably around 1985.
The wooden doll bed needed paint and decoration,  so I found a book on rosmaling  and attempted a simple design on the headboard after painting the bed a light blue.  Sadly, there are no photos of the bed, however I'd also found an unfinished hinged wood box that I painted the same light blue and did a tiny bit of rosmaling on.  Kirsten's wardrobe was stored in this box. 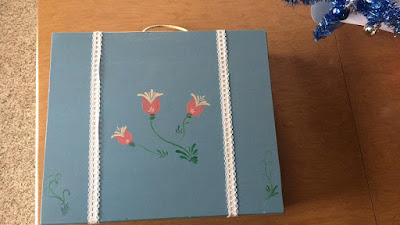 So, all this reminiscing to say that I have no new mini this month.  Another large quilt top in the works though, which will become a donation for the local church camp's annual auction.  It's looking like it will be a go for them having a regular summer camp schedule this year, and they will need the auction proceeds to fund scholarships for children who cannot afford the full cost, and for camp upkeep.
So, to see a lot of wonderful new mini quilts, go to Wendy's (Constant Quilter) post to see a delightful assortment!  Thanks to Wendy for hosting this mini parade every month!
Until next time, happy stitching!

A Design Wall, Pins, Scotch Tape, and a Top is Born

My diamond jubilee quilt top is finished.  Mixed emotions about this one, on the one hand thinking it is a hot mess, but absolutely loving so many of the details.  It was definitely a challenge quilt from beginning to this point, and that was exactly what my beginning goal was, to see if I could make a pattern this complex.  I wanted a brain challenge, and boy did I achieve that goal!

This month has been spent doing what I thought would be the easy part of the process, stitching up 324 flying geese for the sashings.  After all the sunflower blocks pretty much went together without a major hitch, how hard could flying geese be?  Turns out the geese became a huge growling bear!  I cut the first few according to the pattern directions and after attempting to trim them up using my bloc-loc flying geese ruler, they were coming out too small.  Cut larger pieces, but still many of them did not trim perfectly to size.  At that point "done is better than perfect" became the slogan of the week, along with Gwen Marston's advice that if it's to small, add something, and if too large cut something off.  I've really come to appreciate her sage advice!

So, a few photos of the assembly process. 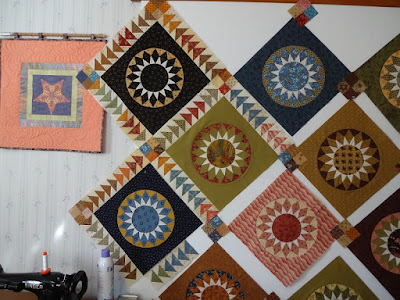 The pins and scotch tape starting to come into play - this thing is WAY bigger than my design wall! 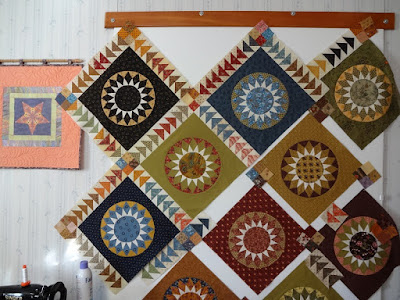 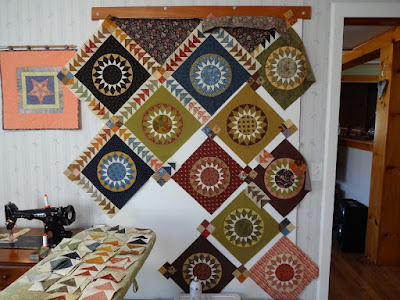 Trying out the setting triangles 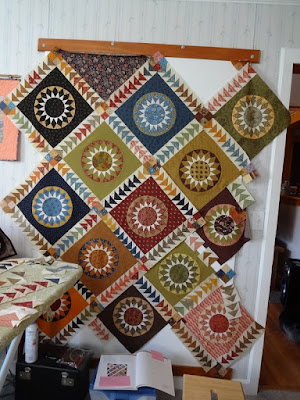 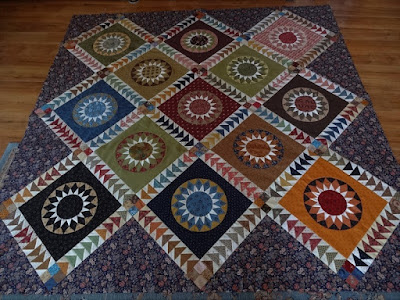 At this point I decided to add a narrow border using the same setting fabric.  While pinning that border I happened to walk in the room and saw this stained glass effect. 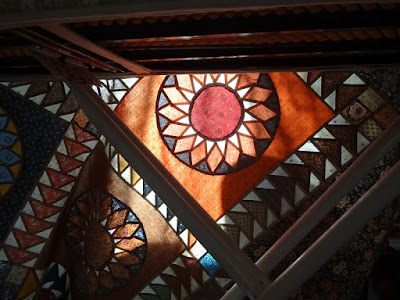 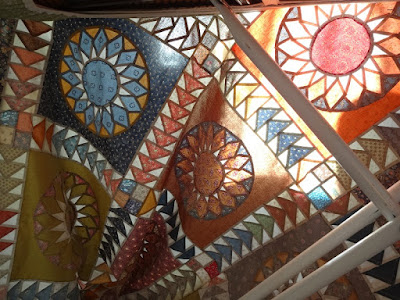 The sun was getting low in the sky and as soon as that last border was stitched I ran outside to see if we could achieve the same stained glass look of the entire quilt.  But the sun was just disappearing behind the hill and the stained glass effect was all washed out by the low angle light.  And now it's rain, rain, rain in the forecast for the next several days. 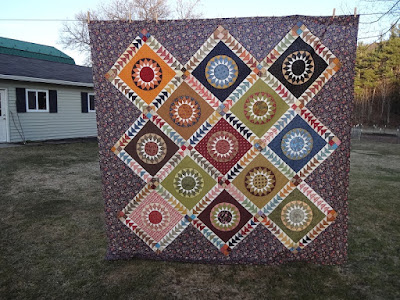 Really difficult to get an accurate photo of that setting/border fabric.  It's much darker than it appears here, probably because it's an older 1980s or 90s print and the fabric is a bit thinner than some of the newer reproductions.  The setting fabric is more true to its color in the lower left corner of this next photo, which also happens to be one of my favorite blocks. 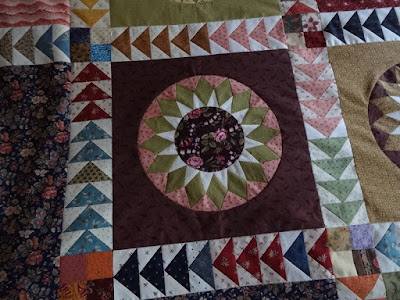 This will be next in the hand quilting lineup, and hopefully it will become a finished quilt sometime during my diamond jubilee year.
The first snowdrops have bloomed by the garage where the sun has warmed the soil this past week.  A few other green shoots are popping up here and there, though the snow still lingers along the edge of the woods where sunlight doesn't reach.  This may be the week I sow the tomato seeds in their little containers though and that will seem to make spring that much more real in our neck of the woods.
Hope your Wednesday is going well, and that you have some happy sewing to fill your days!
Posted by Quilting Babcia at 10:45 AM 28 comments:

Mini Contemplation and Catching Up

Though I thought about it a lot, no mini quilt was completed in February, and the next one will likely be on hold for another month or two.

This piece has been nagging on my mind for the past several years, namely what to do with it! 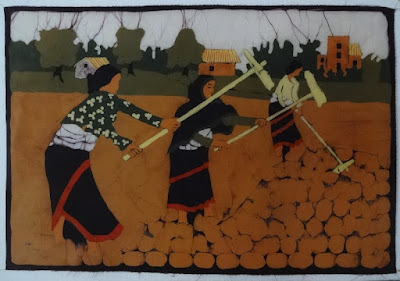 A piece of batik, though extremely heavily waxed and stiff, 18 x 12-1/2 inches, purchased several years ago at a thrift store.  The pencil lines outlining the figures are clearly visible, and it seems to be an original of some sort, but what?  Searching the internet several time over the years has yielded no clues as to its origin or its potential value - maybe no more than the dollar paid for it.  It does soften up a bit when pressed with the iron but the stiffness returns as soon as it cools, so I'm thinking it will be somewhat difficult to stitch and have no allowance for errors in machine quilting.

But, I threw it up on the design wall a couple weeks ago right above this motley grouping of leftover HST's, and immediately saw a couple possibilities. 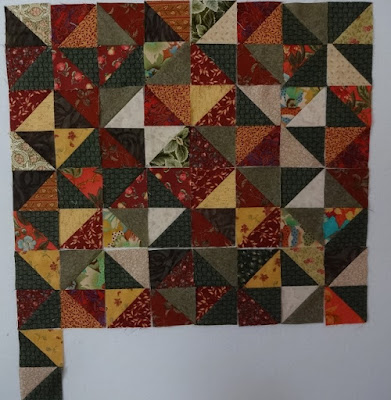 Maybe a broken dishes border around the batik after first adding a narrow coping strip?   I'm open to any ideas and also if any of you has seen a similar type of batik or know it's possible origin.
Meanwhile, since finishing Sing the Blues, I've been without an evening hand quilting project that I can work on while watching tv or chatting with hubby.  I dragged an old ufo out and have appliqued a few more of these little blocks. 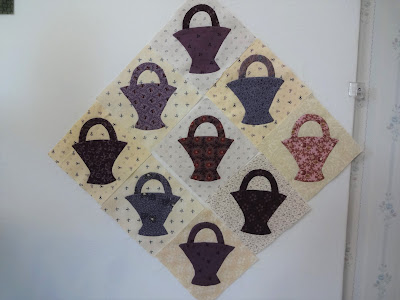 To be honest I'm just not feeling the love for this project and it's been put away again.  Had to take my own advice to a fellow member of our quilting ministry who recently said she just didn't feel like making quilts anymore.  She's an excellent self-taught crafter and artist who dabbles in all sorts of projects.  I told her that if she doesn't feel the joy in quilting right now, she should make what she loves, some of our members are involved with crocheting and other needlework projects also.   One of my personal resolutions this year was to only work on quilting projects that are bringing me joy, and so there's only a little tinge of guilt at setting those baskets aside until that happens.
What is continuing to bring me joy (and maybe a bit of much needed patience) has been working on the next step of my diamond jubilee quilt.  Cutting and stitching 303 flying geese so far, with only another 21 to make later today, although I'll probably end up with closer to 350 so I'll have a few options when it comes time to assemble all the sashing strips.  Then, it's on to making a bunch of 4-patch corner blocks, trimming everything up and assembly of the top.  I'd really like to have this top completed by my 75th birthday which is coming up rather quickly in a couple months.  I think I can do it. 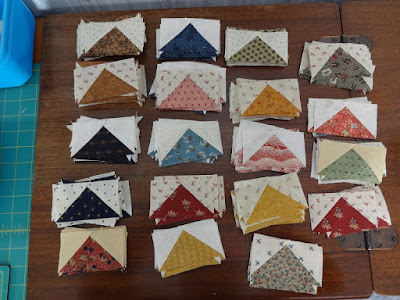 Meanwhile back to the hand quilting conundrum, I'm continuing to work on Quilty 365, trying for a couple hours several afternoons each week.  I need to work on that one in the daylight and before my eyes (and back) get too tired as the day progresses.  But I've come up with a potential solution for an evening project.  I finished marking Younger than Springtime this week at quilt ministry and the thought occurred that I could do big stitch hand quilting on the stenciled hearts in the smaller areas between sashings and later machine quilt the more complex stencil in the larger blocks.  So, I've selected 8 or 10 pastel shades of Aurifil 12 wt. and will begin that this evening. 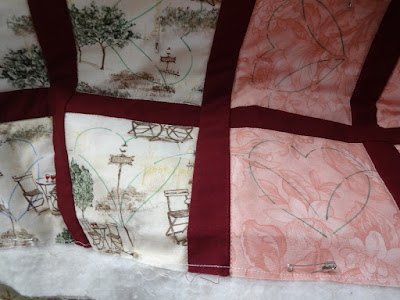 And the whole top: 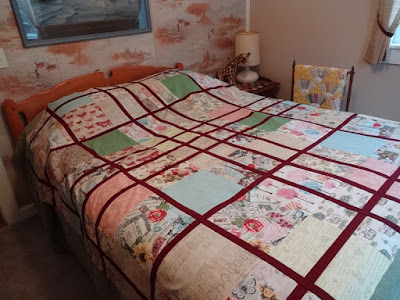 So, now it's back to piecing flying geese!  Have a great weekend!