A Completed Flimsy, at Last!

It seems like forever that I've been toiling over this quilt top, but at last, ta-da! 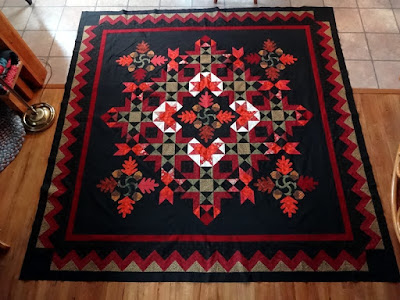 Now, what are the odds that the very day you need to lay the quilt with the black background out on the floor a bajillion times in order to measure each of the five borders, that the long-haired Aussie puppy would begin to blow his winter coat?  Apparently, in this house, about 100 percent!  Despite several sessions vacuuming floors and carpet, by the time every last border was stitched the quilt top  was covered with long downy white dog hair.  An hour or so this morning with the lint roller and scissors trimming the little threads away from seams, and it was finally presentable for a photo.

That 4th border with the parallelograms gave me a bit of a hassle, but if one steps back and ignores the somewhat haphazard points it doesn't look too bad.  Like they say, if you can't see it from the back of a galloping steed at 20 yards ...  I do love that mantra!   The finished top measures about 91 inches square, though it doesn't appear square in the photos, given that our ceilings are low and it's difficult to get a good angle for a straight-on shot. 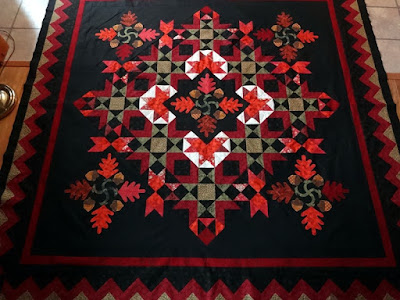 We seem to have broken the back of winter around here, and though it's dark and gloomy today, tomorrow's forecast is for partially clearing skies and temperatures near 70 in the afternoon - I for one can live with that!  We are seeing the maple sap buckets and lines out now, and hopefully the temperatures won't remain so warm that the trees bud out too early, and ruin the sap run.  We still need to have nighttime temps below freezing for awhile longer for a successful season.

The aforesaid puppy is now nine months old, and though we had hoped he would know better by now, he seems to have it in his head that anything and everything is his for the chewing. We still can't let him out of our sight in the house, sad to say.  Last week he managed to chew the plug off my iron, which thankfully was not connected to an outlet at the time. The quilts have gone into hiding, behind closed doors or tucked away in blanket chests since one was found yesterday with a hole chewed into the muslin back and batting but thankfully missing the front patch and hand quilting. Mendable, but still ...

The hand/wrist issues I've been having all fall and winter turned out not to be so much carpal tunnel related, but rather significant arthritis and bone spurs.  So, it looks like the pace will need to be slowed to try to stay ahead of it and not invite more painful flareups.  Thankfully I can still hand quilt for short stints and hand applique doesn't seem to aggravate the wrist. Rotary cutting and machine stitching are more problematic, and I really need to pace myself much more.

Still plugging away on hand quilting my Quilty 365 and the basket quilt in spare moments, with hopes of having both completed sometime this year. Pictures when there is more significant progress to show.

One more close-up of the newest flimsy 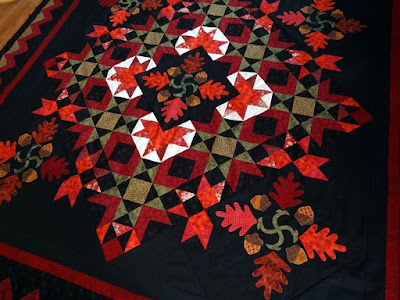