After taming pinning the beast on Monday, 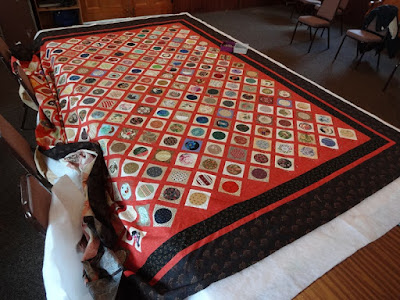 Half at a time, two tables wide

and basting the backing over the edges on Tuesday evening, I couldn't resist tossing it onto the guest room bed where it will rest after quilting.  Sneak peek ... 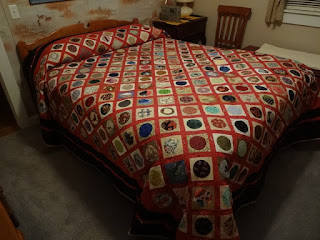 And last evening I finally got it into the Grace 2 hoop and took the first stitches! 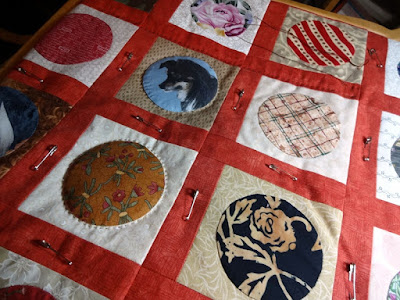 The first circle quilted had to be our Olie block, which is in the very center of the quilt top. I'm going to quilt this with big stitch quilting, and am using Aurifil 12 weight thread. I've tried big stitch quilting a couple times, and have had trouble finding the size/type needle that quilts easily yet has an eye large enough to get the 12 weight thread through without shredding.  Earlier yesterday I rummaged through several older sewing boxes, and look what I found. 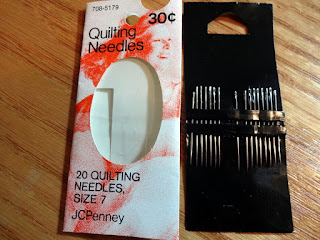 Oh-my-gosh, these are just about perfect!  Anyone want to venture a guess how old these babies are? My guess is that I bought them well over 30 years ago, but it may be longer, or perhaps they even were picked up in some yard sale long ago. Whatever the case, they are not rusted, and glide through the fabric beautifully, much better than the chenille needles recommended by the nearest quilt shop for big stitching projects! I think the chenille needles will be great for wool or flannel quilting, but they seem to drag through the quilting cotton and really tire my fingers. I'm so happy most of the needles are still in the JCP packet, all shiny, sharp and ready to go.

So now there are two projects in hoops, Quilty 365 is in my sewing room where it won't need to be moved constantly, and the basket quilt is in the hand-held hoop on my recliner in the living room where I can work on it while watching tv. 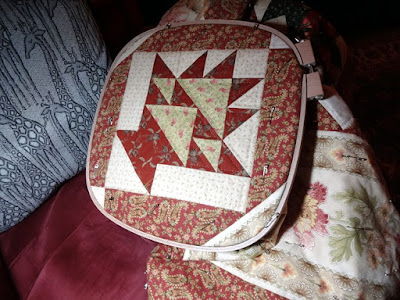 I'm hoping to put some stitches into each quilt every day so they can eventually crossed off that 17 in 2017 list. Hopefully while it's still 2017! Meanwhile, languishing in a corner of the sewing room 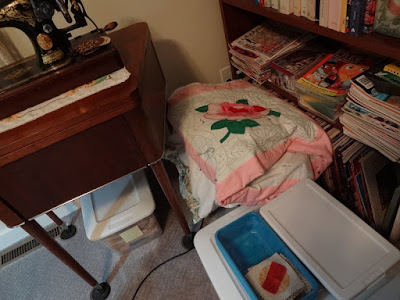 the king-size vintage rose applique, just where it was plopped sometime last year when I began quilting my husband's Astoria/Oregon Memories quilt.  Under the big rose quilt is a tote with yet another vintage quilt top remake awaiting its turn and surrounded by 4 more containers with quilts-in-the making, including the remainder of the Quilty 365 circles. Still don't have any grand ideas for those leftovers yet, but they can cool their heels for a few years months while the beast is finished!

Do you have multiple quilts in hoops at the same time?  Or is this insanity?
Posted by Quilting Babcia at 7:49 AM 11 comments:

Gathering up the Circles

The past couple weeks have been an adventure of the good, the sad, and sometimes downright scary times, with only a bit of sewing accomplished here and there.  The good times - a six day visit from our tiniest munchkin ... 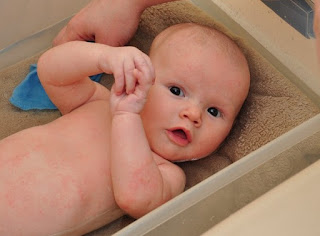 Bathtime in one of grandma's larger fabric totes!

The sad - visiting a dear friend for the last time, at a hospice facility. And the scary - our son and his family had a tree fall on their house - twice in one week - during successive windstorms. Thankfully in both instances no one was injured as they were not in the rooms affected by the tree strikes which resulted in cracked and falling plaster - the two larger bedrooms of their two-story home. A total of four large trees blew over in their yard during the second storm, one of which also ripped the electrical wires off the house. As is usual with these types of storms many homes were without power, and no generators were to be had in his area, so we were lucky enough to find the only generator still available locally that morning and delivered it to them - some 100 miles away. Thankfully their power is now restored - in time for the nor'easter which hit yesterday, and it is still snowing and blowing in our end of the state. Our daughter who lives about 125 miles east of us has about 36 inches of the not-so-welcome white stuff. We fared better, with only 12-18 inches drifted in the driveway and the back deck so far.

Just before all these goings-on, I spent a morning at the church fellowship hall, arranging my Quilty 365 blocks into rows. This top is being built diagonally, so I started with the first row, which on the finished quilt will end up as bottom left to top right - 25 circle blocks. With the diagonal setting, it took four tables across to get all the squares in place 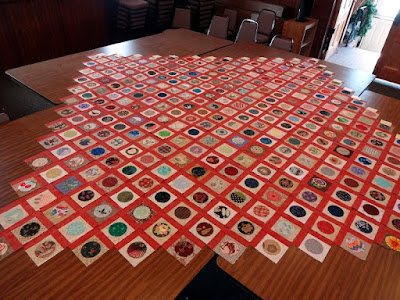 plus a chair for the last two rows! 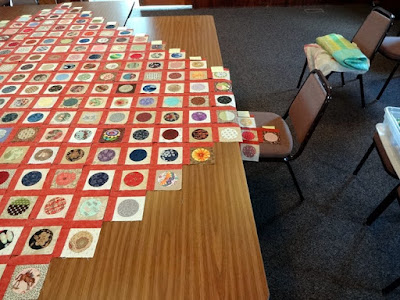 After labeling each row I gathered everything up and returned home, and in spare moments began stitching the blocks together, adding setting triangles at the ends of each row. I recall saying in an earlier post that the odds were pretty good that a duplicate fabric would show up in an adjacent block, to be noticed only after sewing together ... and yes! 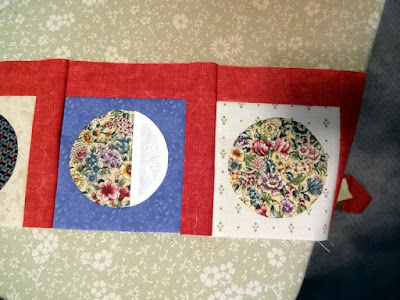 The only one I've caught, so far, and at this point I figure if these fabrics want to stay together this badly, who am I to argue?

I started with the shortest rows which will end up on the upper left side of the quilt, stitching rows together in groups of three. 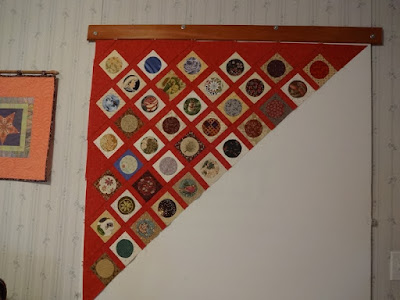 At that point I decided it would be easier to add these shortest segments onto the main quilt body last, so I moved on to sewing together the longest diagonal rows, and here are the longest segments stretched out on the living room floor. 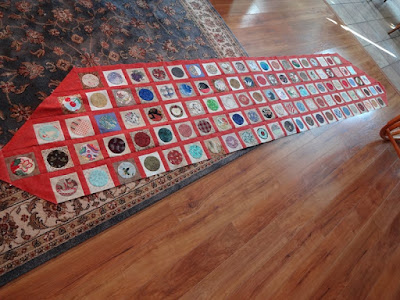 Point to point diagonally this monster measures a whopping 132 inches! Yowzers, these are long seams! When all the sections are sewn together the top should measure somewhere around 92 inches square. Before borders. In the meantime, strips and segments litter most every surface in my sewing area. 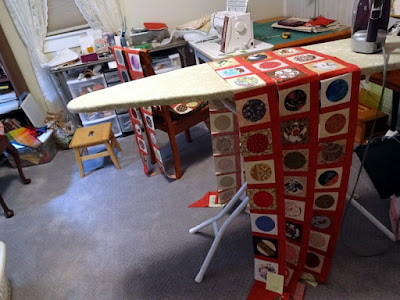 At this point all the segments are made for the left side of the quilt and I think there are nine or so rows of circles yet to be stitched together. Hopefully in the next week or so, barring any more major interruptions to the scattered and scarce sewing time around here.

I realize all this may make little or no sense to anyone else, but I'm so excited to finally see this quilt beginning to take shape, just as I envisioned it several months ago! And I'm so thankful that there was enough of that burnt orange sashing fabric to make the quilt the size I had hoped for. Luck of the Irish? This week, that may just be the case!