May Mini and Miscellaneous

A quiet holiday weekend at home.  We invited a couple of older friends from church to our place for Friday fish-fry take out from our local restaurant.  They too are tired of the unending isolation and gladly accepted, bringing with them this gorgeous bouquet. 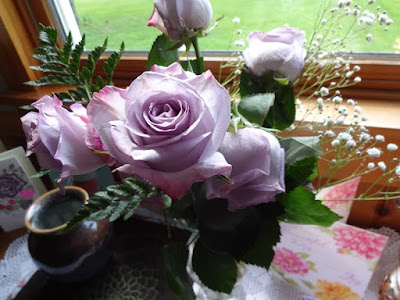 So very thoughtful and beautiful, especially since not much is blooming outdoors at the moment, even the dandelions in the lawn have gone to seed.  We had a wonderful evening eating, chatting and reminiscing about better days.

The weather has been warmer and even sunny several of the past few days, enough so that the side porch has been scrubbed, the bistro table set out, and my latest little mini resides there now.  Here it is, along with the very last of the daffodils and tulips from the yard. 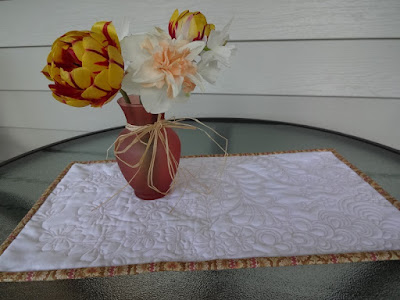 As you may have guessed this mini mat is another of my 2012 FMQ practice pieces that I wanted to save to hopefully remember some of the designs.   Now bound and made useful in other ways too. 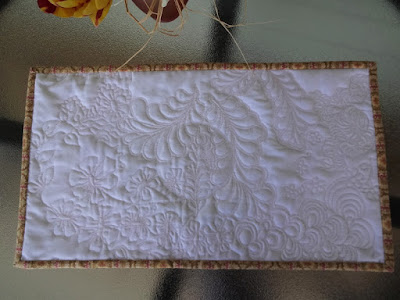 So many feathers, I love them, don't do many now because my eyes aren't good enough to track back on the previously quilted curves anymore.  Maybe someday.  I was finally able to get an appointment with the retina specialist for early June, so we should know more about the prognosis after they have done all their testing.

We visited one of the local nurseries last week, and I fell in love with this hanging basket - tuberous begonias.  I've never had this variety of begonia before, hope I can keep them blooming all summer.  Aren't these flowers just luscious! 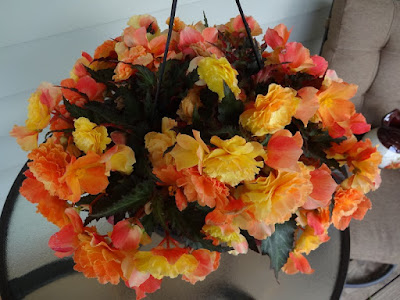 They remind me of slices of fresh summer peaches. Yummy! 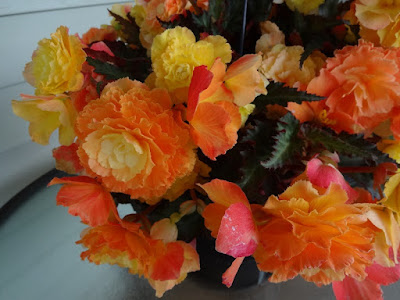 Another piece of positive news, we've been given the go-ahead to restart our quilt ministry at the church fellowship hall this week, as long as there are not more than 10 people, wearing their masks, etc. etc.  So very happy about that!  We have plenty of room to meet all the guidelines so we're good to go. That will lift so many spirits.

I'll link this post with Wendy at The Constant Quilter when she posts her end-of-month mini roundup later this week.

I've followed with interest some fellow bloggers who have made Jubilee quilts to commemorate their 50th birthdays.  Being long past that auspicious occasion, I wondered if there were any Diamond Jubilee quilts out there.  I spent an evening in the company of google and learned the following:  that a diamond jubilee can commemorate either a 60th or 75th anniversary or birthday.  Breathing a sigh of relief, as I'm also long past the former and approaching the latter at seemingly the speed of light.  There is a quilt pattern marketed that is named Diamond Jubilee but I found no mention of a diamond jubilee quilt made for the purpose that I had in mind.

There are several of us in the quilt ministry who either are 75 this year, or will be next year, so I asked who would be interested in making a diamond jubilee quilt of their own choosing, that we could do as a special project.  At this point my friend Lois and I seem to be the only ones, though since the group hasn't met since early March, there may be some others who will join in when we resume.  Lois has already begun her quilt, an applique medallion surrounded by pieced blocks, the pattern name I've long forgotten.  The quilt I had in mind is this one, from the book 19th Century Patchwork Divas' Treasury of Quilts by Betsy Chutchian and Carol Staehle. 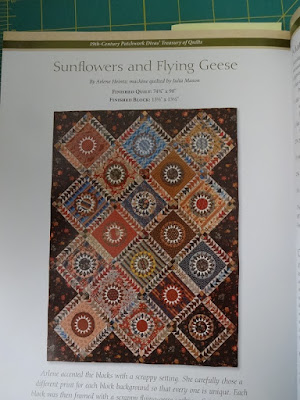 I've drooled over this quilt since first seeing Cathy's version (Sane, Crazy, Crumby Quilting) that she completed late last year.  So, I bought a used copy of the book, the templates, and after raiding all my stash and scrap bins accumulated a huge pile of potential fabrics which sat in the way in their large 24 inch bin on the floor for several months. 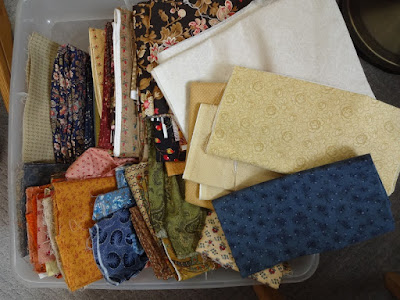 And last weekend I finally pulled a couple fabrics and began cutting pieces. 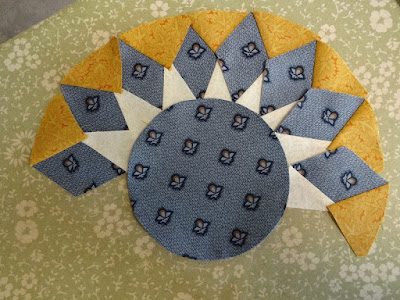 Oh yeah, this is going to be fun! 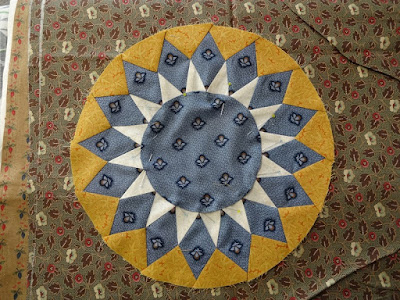 Playing around with auditioning a few potential backgrounds.  And that center circle definitely needing to be trimmed just a smidge so it will lay flat.

And here's where I am as of this morning, center circle trimmed and repressed, ready to be basted and hand appliqued. 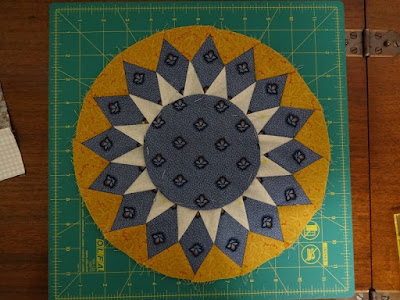 I think my goal will be to make a sunflower block every two or three weeks until there are enough to make a good size quilt (may well not be quite as large as the original).  And I'll wait to add the various background fabrics until all the sunflower circles are pieced.  Right now I'm contemplating making 13 rather than 18 sunflower blocks, and adding an outside border or two for a square quilt.  Time will tell.  One thing I've learned is that cutting those tiny pieces with my smallest (and original) rotary cutter is extremely hard on the joints in my wrist, so it will definitely not be a project done quickly.  And that's OK with me, this is meant to be a fun as well as challenging project!

It is snowing heavily as I write this, with more snow in the forecast for several days ahead.  Bah-humbug!
Posted by Quilting Babcia at 9:20 AM 20 comments: