Year-end Wrapup 17 in 2017 or The Year of Distractions

Well, I only loosely followed along with the crowd doing the 17 in 2017 challenge, never really posting much about that scribbly little list I'd made. Looking back I think that was because it just didn't seem like much progress was being made on that list.  But early in the year it became apparent that 2017 was to be the year of distractions opportunity quilts - those made as a member of our little quilt ministry.  Now, the stats for that list are w-a-a-a-y more impressive! And, in these few days after Christmas I found myself once again working on a new opportunity quilt rather than getting back to one of the original 17 in 2017 projects!

So, a month or so ago I posted a partial mock-up of a bunch of scrappy HST's I'd been stitching at the quilting group, in an effort to encourage others to begin using up the mountains of scrappy pieces we have stored there. Originally planned to be another nursing home quilt, but a couple days before Christmas a family of 6 in a neighboring town lost their home and all their possessions in a fire.  Time to push this project in another direction. So, here's where we are tonight, scrappy HST's sewn together, borders added, backing fabric found in the stash, and now all layered and pinned, ready for a quick machine quilting and binding next week so we can get it delivered to the family asap. 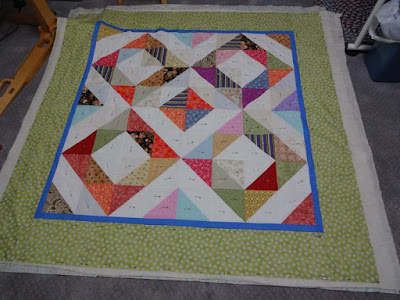 and the back, I love this sweet pale green with all the bubbles. 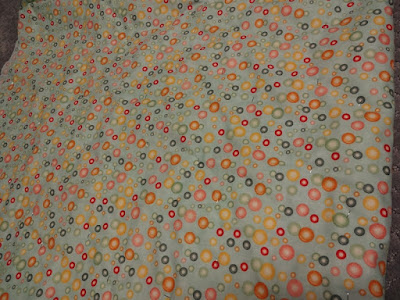 So, where does that leave 17 in 2017?  I had 17 projects listed, seven are now finished, another 5 were inched forward, and absolutely nothing done on the remaining 5.   As for the reverse side of the list, the Opportunities definitely won out, with 9 projects listed, 8 of those are finished and the last one you've just seen in it's 'ready for quilting' state.

Still mulling over whether to join in the 2018 challenge, which actually sounds like it "could" be a bit easier, with six UFO's and six new projects.  What this year taught me is to never underestimate the power of the distraction to completely take over your carefully planned pursuits!  I think the biggest disappointment was not finishing even one hand quilted project, of which there are three ongoing, all either queen or king size.  Finishing at least one in 2018 will be one of my major goals for the year!

If you care to look, all of this year's finishes can be viewed under the "2015 and Later" tab at the top of the blog.

May your new year bring you good health, good friends, and an abundance of good quilting time!
Posted by Quilting Babcia at 9:45 PM 10 comments:

Late last week I finished hand stitching the binding on the last of this year's hexie table toppers, most of which are slated as Christmas gifts.  They are all wrapped now, some already gifted, and one smaller one I'm planning on keeping, at least through this next weekend.  Unless another gift-giving opportunity pops up at the last minute that is!

Sad to say, there was no time to even dig the Christmas fabric bin out of the depths of the closet, so these were all made from scraps and stash that were more readily available when the initial inspiration struck.  Without further ado, the finishes:

I don't think the second finish was shared earlier, this one went to my daughter as a little housewarming gift: 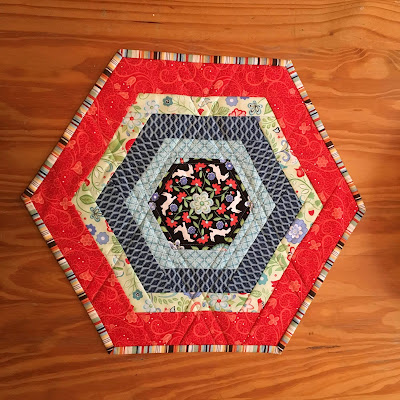 Most of the latest batch: 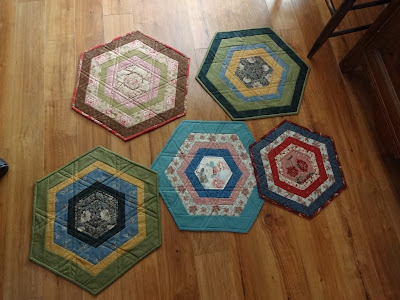 And the last one ... of course I needed help keeping this one grounded! 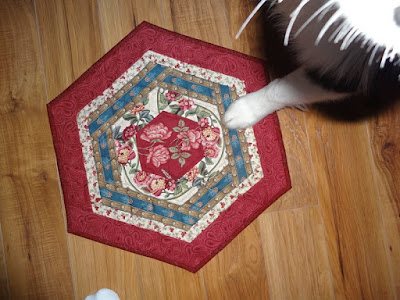 And now, my Christmas wish for each of you is for a joyous holiday season and may the new year bring you much happiness, health, and peace in your heart, and of course an abundance of quilty fun!
Posted by Quilting Babcia at 9:52 PM 9 comments:

Email ThisBlogThis!Share to TwitterShare to FacebookShare to Pinterest
Labels: 2017 Finishes

A December Finish and Soft Packages

Late this afternoon the last stitch was put in the grandson's Christmas quilt - yay! So happy to have this one out of the way so other holiday preparations can begin.  So, without further ado, here are the finish photos, very hastily shot while our new four-legged friend was outside briefly. 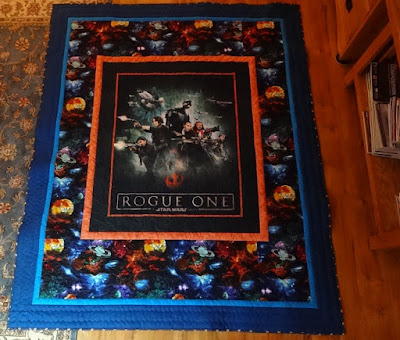 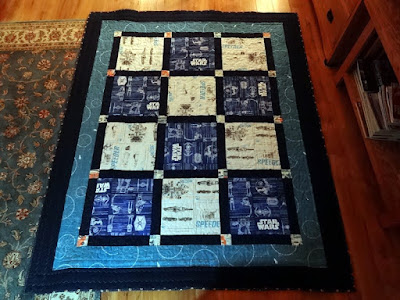 This was free motion quilted with a fairly large meander leaving the quilt nice and soft. I used a variegated thread in the bright border and then in the outer border repeated the variegated thread but used the even feed foot and my machine's serpentine stitch. 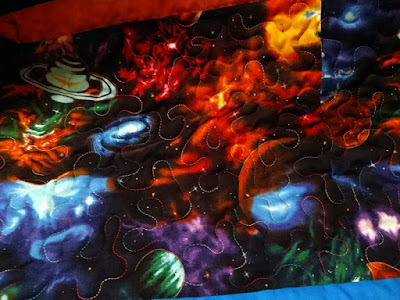 Finally found a great use for this variegated thread!

I was about finished photographing the back when in bounded this guy heading straight for the quilt (of course)! 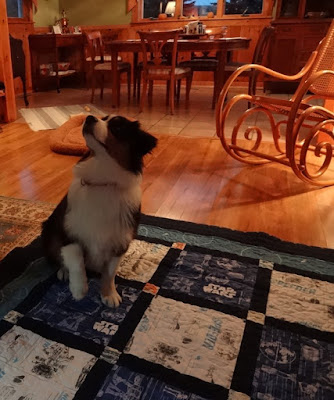 The only in-focus shot of the whirling dirvish!

We're having to watch him like a hawk as he can find more stuff to get into the minute we look away.  Pretty much like having an inquisitive toddler in the house, but there's been a lot more laughter around here these last couple weeks so it's all good. We have decided that the Christmas tree will need to be a table-top one this year for obvious reasons!

In today's mail was one of those small squishy packages that we quilters so love to see, and this one was the result of having won a recent giveaway from Barbara Woods - this sweet gathering of fat quarters! Thank you so much Barbara! 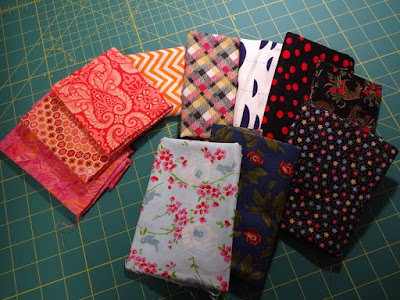 Keeping those in the path of the raging fires in California as well as all the firefighters in our prayers tonight. 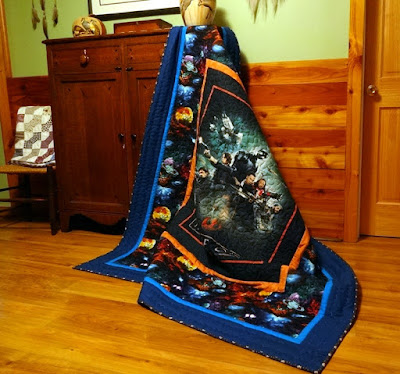