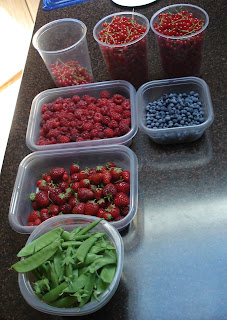 There's been precious little time for this ... 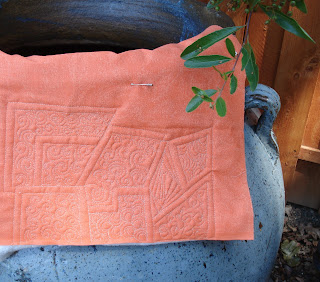 July's Free Motion Quilt Challenge tutorial was provided by Angela Walters, modern quilt FMQ expert extraordinaire.  She provided a tutorial for a design called Tiles, which is also illustrated in her new book Free-Motion Quilting with Angela Walters - Choose & Use Quilting Designs for Modern Quilts.  My copy of her book arrived just a few days before we received our July Challenge tutorial, and this book is definitely a keeper!  Not only does it illustrate some gorgeous modern quilts, but she provides step by step diagrams and instructions for all of the featured designs.

So, this design challenge looked easy enough. What I've learned about SewCalGal's Free Motion Quilt Challenge is that some of the most deceptively simple designs prove to be the most difficult to achieve, this one being the latest case!    Thinking this challenge block would take 15 or 20 minutes to complete, ended up taking an hour and a half, and it isn't that large!   Those tiles turned out to be difficult to freehand - found myself dead-ended more often than I'd have liked. 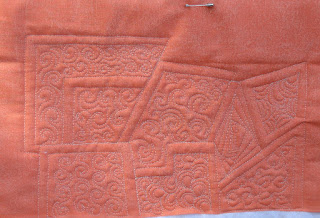 Lessons learned:  I don't draw a straight line any better with a needle than with a pencil - take the time to draw out all the straight lines with a ruler and washout marker before starting to stitch.  Secondly, practice lots and LOTS of swirls before attempting to use them in a quilt.    My swirls were abysmal at best.  Think they might go a little better if quilted in a larger scale.

This will probably be the best I can do this month.  The garden is coming on strong now that we finally have summer in the Pacific Northwest.  But, I know Angela's designs will be used often, especially in the quilts planned for the older grandsons, who will definitely appreciate "modern" rather than traditional feathers!

Thanks to Angela Walters for a great tutorial and to SewCalGal for providing us with new opportunities for growth each month.  Links to both of their blogs can be found in the list at the right.

This was a fun project begun early this year with no particular goal in mind other than to make a dent in some of the accumulated fat quarters and other scraps in my stash.  Happy to report that no new fabric was purchased in the making of this little toddler quilt, completed just last Friday, thanks to an additional incentive to get 'er done and link up to Amy's Creative Side One Thing, One Week Challenge!  This one has no current destination in mind, thinking I'll keep it for awhile in hopes of a grandbaby visit before they outgrow the toddler stage (all our grandchildren live on the opposite coast and we generally travel there for visits).  Without further ado, some pics: 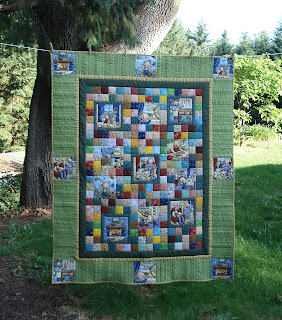 Several machines were played with  used during the making of this quilt!  Piecing was done on my 1950s Singer 301.   All the little squares and picture panel borders were quilted in the ditch on the vintage 1960 Singer 401 with walking foot; and free motion outline quilting was done within the picture panels on the old 1942 Singer 15-91.   Then the new Janome arrived, and the borders were free motion quilted as practice with my new machine.  Completed quilt measures 50x62 inches, has a thin lightweight poly batting, and was quilted with Aurifil Mako 50 thread. 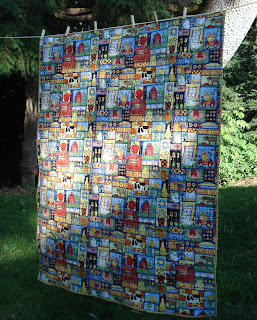 Backing fabric is a print from Wilmington's Fun on the Farm line. 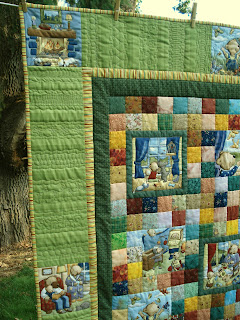 Close-up of some of the border free motion designs. 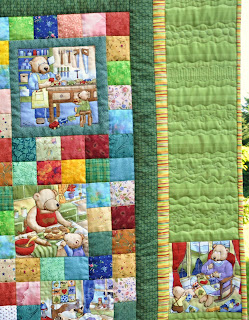 The sweet little bear panel prints are from a line called Counting my Blessings - sorry, not enough of the selvedge left to tell me the manufacturer. 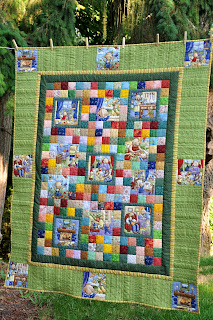 We finally had a warm, sunny weekend, so Saturday morning we rigged a makeshift line and photographed all of the year's finishes to date except for daughter's summer quilt which has already gone to its new home.  We do need to work on a better arrangement for hanging the quilts outside, especially when the queen-size ones are completed.  Another day, another project ...
Posted by Quilting Babcia at 11:01 AM 1 comment:

Email ThisBlogThis!Share to TwitterShare to FacebookShare to Pinterest
Labels: 2012 Finishes, My Quilts

This year's resolutions included finishing all the UFO's stashed in various corners of the sewing room, and other places in the house, and taking the pledge to complete SewCalGal's Free Motion Quilting Challenge.  Now, just over halfway through the year, I'm happy to report completion of four bed size and one lap quilt, one wallhanging, and one toddler quilt will be finished later this week.  Now, that doesn't amount to much by many quilters' standards, but for me this is an all-time high!  I'll start posting some of these finishes as time allows, and some won't be made public until after Christmas.  There are now two remaining UFO's, both queen size, one of which has been in the hand quilting hoop for more than a year now and may not make the goal.  But then that quilt has been aging gracefully, probably more so than its maker, for the past fifteen years!  What's another year or so among friends?  That's the problem, we're no longer friends, that quilt and I, and I'd gladly chuck the whole thing were it not for the many hundreds of hours already invested in intricate piecing, hand-appliqued Rose of Sharon border, and over half of it laboriously hand quilted.  It HAS to be finished, and we will drag ourselves to the finish line ... one of these years.

Enough of that, on to a 2012 finish.  This is a quilt begun nearly two years ago after my daughter had casually mentioned she would really like a queen size "summer quilt".  Her last quilt was made for her early college years, over ten years ago, and while it has held up well considering its constant use, it doesn't fit the queen size bed she now has.  After completing three months of the FMQ Challenge I decided to attempt free motion quilting this huge quilt on my old Singer 15-91, using the designs we learned during the first months of the Challenge:  the leaf design taught by Frances Moore, Diane Gaudynski-style feathers, and the loops and flowers meandering designs taught by Ann Fahl in March.  Moving the bulk of this huge (84x106) quilt through the machine proved to be a real challenge but also a great learning exercise.   Entire quilt took nearly a month to quilt and bind, and was finished two days before our trip.

Photos had to be taken indoors as the weather was cold and rainy when this was completed.  Still is, for that matter.   The finished quilt was delivered to its new home with my daughter in early May. 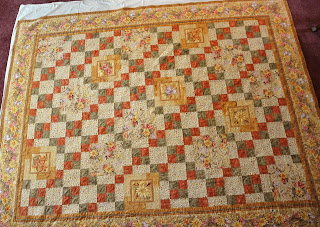 Fabrics and the pattern are from Wilmington's Natural Splendor line.  Hobbs 80/20 cotton batting and Aurifil 50 thread for quilting, both top and bobbin. 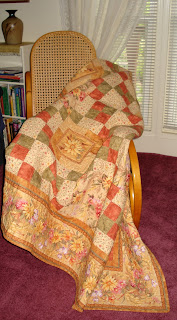 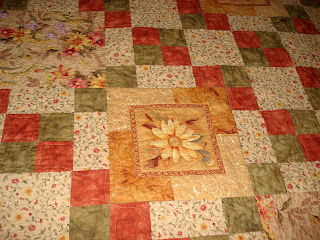 Feathers quilted in the border of each large flower block.  Freehand feathers were also quilted in the outer borders.  They did not photograph well with my little camera but actually show up quite well on the quilt despite being quilted over a flower print border. 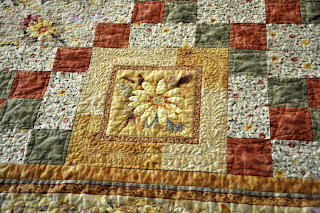 Most of these photos were taken after the quilt was washed, all nice and soft and crinkly.

Hopefully the toddler quilt will be ready to post in the next few days.  Have a safe and happy 4th!