A couple weeks ago, Audrey of Quilty Folk celebrated her fifth blogaversary with a giveaway, and I was the lucky winner of this book that arrived in yesterday's mail. 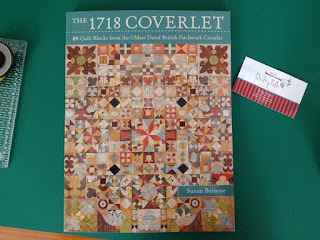 I've only spent a few minutes with the book so far, and although I doubt I'll ever make the entire quilt, there are a number of the simple applique blocks that would make great hand quilting templates, and a really fabulous primitive goose applique that will definitely find its way into a future quilt.  Here's a close-up of the image showing the goose (also note the smaller swan block). 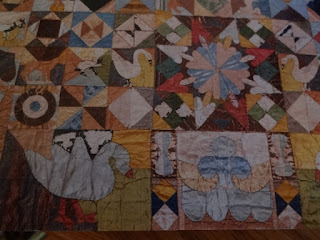 Quilty Folk happens to be one of my favorite blogs since discovering it during a Bloggers Quilt Festival a year or so ago.  If you're not familiar with Audrey's quilts yet, you definitely need to head over and check out her blog.  Her delightfully whimsical and original style is a breath of fresh air, and a source of inspiration to reach out beyond our own comfort zone with our quilting.   She has a series of posts on the courage to feel creative that is thoughtfully written and I found very encouraging in trying to step outside my little box in fabric selection, color and fabric design combinations.  Thanks so much Audrey, for taking the time to write these blog posts and inspiring us with your creative style!  And for my blogaversary winnings!

I've been moving ahead with the basket blocks, and now have 23 completed and one more nearly done, as soon as I find the seam ripper to remove one badly mismatched piece and resew.  Here are a couple of the more recent baskets.  A few more (so I have plenty to choose from to play nice with the setting triangle fabric), and it will be on to putting this top together.  Looking forward to seeing all of them laid out on the design floor. 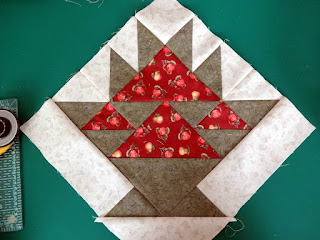 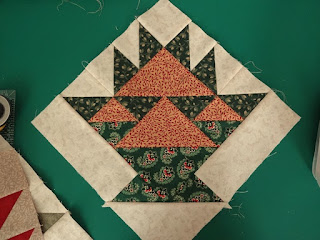 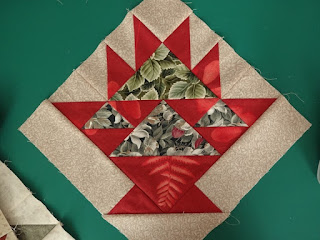 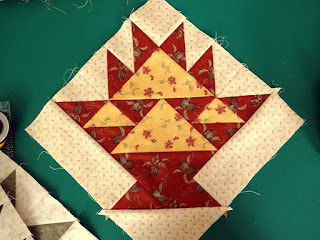 Are you ready for August?  Definitely not at this end!  Happily, we still have at least one more month of summer before the threat of frost hits and we begin covering the tender garden plants at night. Will the main crop of tomatoes ripen before then?  It's beginning to look doubtful, but at least right now we're enjoying green beans and a bumper crop of summer squash.

Posted by Quilting Babcia at 8:13 AM 6 comments:

Ever feel like your hand quilting is weighing you down? 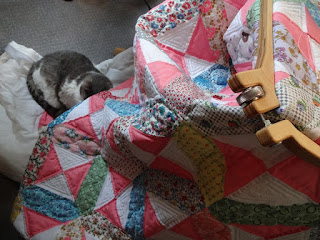 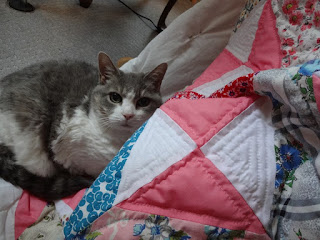 Yep, she's the reason I'm often found reading blogs or writing posts, or even stitching at all hours of the night.  Our 18-year old kitty who only recently found her voice and isn't afraid to use it, especially at night ... sigh ...  She's also a quilt-hog!

The hand quilting on the Blockade quilt is going much slower than I'd like, early morning hours notwithstanding.  But we are progressing, however slowly, and the blocks are now about 2/3 quilted. So looking forward to getting on to the borders where the quilting will should go a bit more quickly, hopefully with way less rotations of the hoop.

Curiosity got the best of me the other day and I decided to attempt a listing of every quilt I've made or worked on since starting my first quilt some 35+ years ago.  Mind you, there were years that went by with nary a quilt in progress, in fact the vast majority of completions have been in the last five or six years, most since I retired.  But, I was happily surprised at the following tally:
Quilts completed entirely by me (includes wall quilts, but majority are crib or bed quilts:  47
Group quilts participated in:  5
Vintage tops made by others, quilted by me:  3 to date
Quilts in progress:  4 (soon to be 5, fabrics for the next one awaiting their turn on the cutting/work table)
Many, but not all of my completed quilts are shown in the various page links found just above the header photo.

Big family gathering heading our way tomorrow for a couple days, followed by some dear friends from Oregon, then another family visit the first week in August.  Adding to the mix a family emergency that will require a big chunk of time over the next few weeks, and quilting and blog time will be mostly curtailed for the time being.  Life is always full of surprises it seems.
Posted by Quilting Babcia at 8:01 AM 8 comments:

Two or three years ago I found a vintage quilt top on eBay that needed rescuing.  Loved the sweet embroidered pansy blocks - 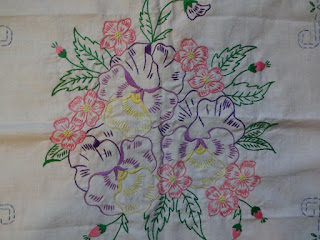 the setting and border fabrics not so much - 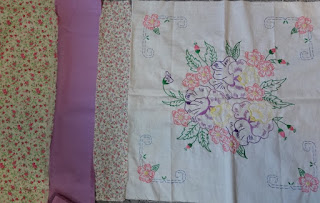 The top was queen size, with twelve 18-inch blocks, one of which was inexplicably not of the same pansy pattern, and not even embroidered(!), but was set right into the center top row nonetheless. 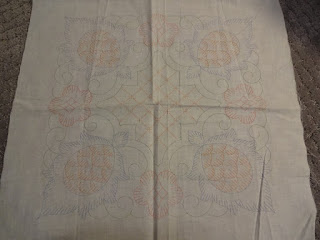 But that wasn't all.  Oh no.  Though the eleven remaining pansy blocks are beautifully and skillfully embroidered, the machine sewn sashings and borders were rippled and pulled by an uneven thread tension, or so I thought.  Clearly, pressing was not going to resolve these seams and the puckers were not going to quilt out.   And there was that unmatching block to deal with.  Unfortunately(?) I apparently never took a photo of the entire top, but you get the idea. 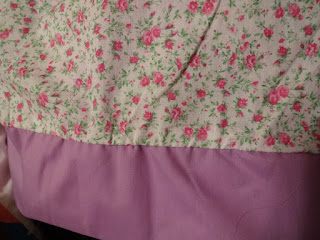 Not many choices other than take the entire top apart.  So, this spring, during episodes of NCIS and Person of Interest, my trusty seam ripper and I slowly began disassembling the top.  And we found the reason for the unintended rippling of the seams.  Unmatched threads.  Yep, the bobbin thread was apparently an all polyester thread while the upper thread a heavier weight, more evenly spun cotton. The thread differences while clearly visible to the naked eye, show up even more spectacularly under the microscope: 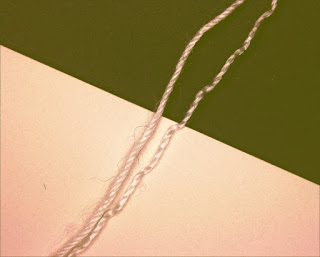 The differences are dramatic, no?  Amazing how that larger more evenly spun cotton thread remained smooth while the much smaller diameter poly thread is all kinked - these photos were taken shortly after the threads were removed from the fabrics. Here's a closer view: 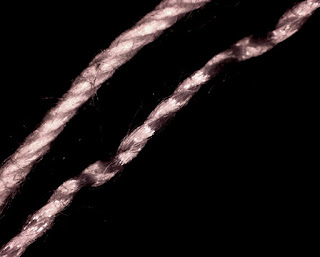 This vintage top did not appear to have ever been washed, and I have no idea when it might have been constructed, but can only imagine how any future shrinkage of the cotton thread from washing the completed quilt might have made the seams even worse than they already were.  I've always been leery of using mismatched threads for machine work, and this is a great example of why it pays to match your threads, or at least use threads that have been tested and proven to play well together.

Anyway, the longer I toiled over unstitching this tarnished gem, the more I came to the realization that putting it back together with those dull, unimaginative fabrics used originally was not going to happen in my lifetime.  At the very least, that solid purple needed to be replaced, it is a thin slippery polyester while the embroidered blocks and the calicoes are all cotton.  That, plus these pansies are just crying out to be framed with a bit more spirit, with some brighter fabrics that will help bring out the embroidery colors, not let the whole thing fade into a monotonous nothingness, while still retaining some of the vintage spirit of the original maker's top.  After a few hours reacquainting myself with the contents of the long-packed stash bins, and some of the scrap piles, we have a first run at some possible additions for sashing, borders. maybe even a swagged outer border should ambition/inspiration strike (thanks to an older 2010 issue of American Patchwork and Quilting). 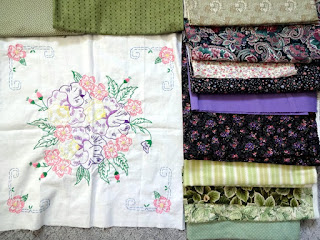 Anything seems possible right now, though I'll still need to find a few suitable small medium pink scraps (currently scarce in this girl's stash) and maybe a tiny bit of deep yellow to highlight the yellow in the pansy embroideries to add to the auditioning pile.  Right now this stack is going back to the the bin to mellow for awhile and see if these fabrics really want to play nice together.  Though I will say at this point, this top went from 'never gonna get done' to 'wow, maybe I can do this' as soon as those old border fabrics disappeared into the bottom of the bin.  This could be fun.  Or angst - only time will tell ...

Getting back in the swing of things

After nearly a week of NO stitching whatsoever, the Blockade quilt is finally back in the hoop and there's another basket block laid out next to the machine ready for stitching.  All's well with the world, at least for the next week and half til the next onslaught of company arrives and everything gets packed up and put away again for the duration!

Some of the kids and grandkids, and grand-dogs have been with us for the past week, and the good times ensued.  The enthusiasm of youngsters is so contagious as they explore new things, like hand-crank sewing machines!  Here's our just-turned-seven year old grandson intently stitching his 4 inch squares together. 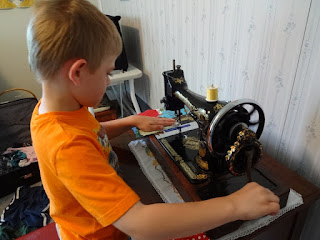 He persisted and stitched four rows of squares together before they left for home, and took all his work home so he could show his friends.  Would love to be a fly on the wall during that conversation!  So enthusiastic, he may just be our next generation quilter - that or an antique dealer - he's also the kid who can't stop looking and playing with a 1905 copper Sterno coffee maker my BIL found at a yard sale years ago and gifted us when we returned from the west coast last year.

Then, little sis got into the act.  She was able to stitch a few of her squares on the old Sew Handy until it got balky and she got bored.  She's just four, and much more interested in hugging the dog and playing in the creek these days, but also insistent on doing everything her big brother does! 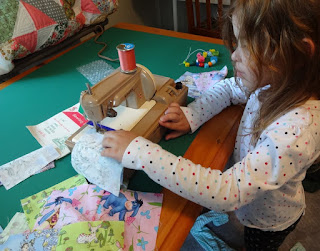 Probably not much stitching today - mowing lawn and weeding the gardens has to be top priority when the sun shines!   Plus, we discovered an invasion of Japanese beetles in the garden yesterday, but not before they had decimated some of the basil crop and made inroads on other goodies.  Had forgotten about that particular menace, we didn't have them in Oregon.  On the plus side, the first roma tomato is nearly ripe and summer squash will be ready in just a few days.
Posted by Quilting Babcia at 7:52 AM 5 comments: