I spent a most delightful afternoon earlier this week with a younger cousin, not stitching but exchanging old photos while internet messaging.  She lives over 100 miles away, and had just been going through some of the old family photos in her late mom's vast collection.  Some of the photos surely date back to at least the 1930s, and perhaps even earlier.  They were taken at my grandparents farm, which holds a special place in my heart, as it was where my happiest childhood memories took place.

When starting this blog I took the blogger name Quilting Babcia in honor of my grandma, my Babcia.  She was a formidable force with a huge soft spot in her heart for her grandchildren, an immigrant who arrived in this country at the age of 16.  She came alone, the rest of her family stayed behind in the old country, hoping to immigrate someday, a day that never arrived.  A distant cousin in New Jersey took her in for a short time, and she found a job and quickly learned enough English to get by.  At 18 she met and married my grandfather, a 20-year old recent immigrant, after a whirlwind three-week courtship. As far as I know they were never apart other than the years he spent serving in World War I.  When he returned from the war they bought a small 24 acre farm and raised their family there.  It became their home for the rest of their lives. 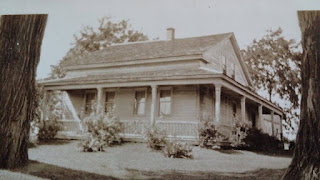 They raised hundreds of chickens in the big old barn, kept a couple milking cows, and later when the cows were gone, Babcia raised her beloved rabbits in the back where the cows previously were housed.  And in that barn I spent many happy hours attempting to catch and tame the summer's litter of barn kittens, one of them so successfully that it followed Babcia around wherever she went and left countless meaty morsels on her doorstep for years afterward. She forgave me. 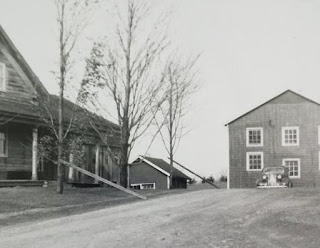 My grandparents kept several huge gardens, and twice a week they would load their green panel truck with fresh vegetables, eggs, and chickens and head for the fresh air market in a nearby city. This was how they made their living for nearly forty years.

Babcia sewed her children's dresses and shirts from the feed and floursack material of the era, on an old Singer treadle machine.  As far as I know she was not a quilter, but she was an excellent seamstress and a wonderful cook and a staunch defender of all her grandchildren.  I adored her.  We all adored her cream cheese cookies!

This may be the only photo of my Babcia holding me,
a photo I'd never seen until two days ago!

Ah, yes, quilting - this week I've managed to stitch some of the setting triangles to the strippy basket blocks, and if all goes well and we don't end up leaving a day or two early, I may get the last row of basket blocks together and all three basket rows stitched to the alternate flower striped rows.  This is how it looks this morning before sewing the panels together.  Note the design wall is now officially attached to the wall, I think that pretty much makes the sewing room officially complete! 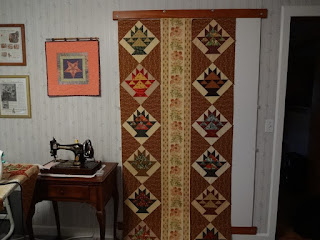 I've also been spending evenings tinkering with a few ideas while continuing the handquilting of the Blockade quilt   Reminder to self: don't keep choosing quilting designs that require constant rotation of the hoop when working on queen-size monster quilts!

What with packing and getting everything we can harvested from the garden, this may well be my last post before we depart.  I don't generally post while we're on the road, but with luck will find enough free wifi to continue following along with your latest adventures.
Posted by Quilting Babcia at 7:53 AM 6 comments:

When I was very young, I couldn't wait until my mom's magazines would arrive, because the back cover often contained a paper doll complete with wardrobe to be cut and assembled, then loved and played with until they were practically in shreds.  I think of those days whenever this UFO is hauled out of the little bin. 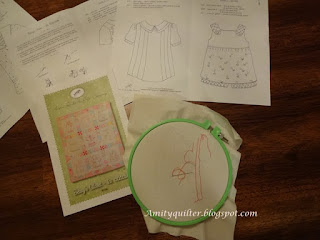 Called Betsy's Closet in Stitches, it reminds me of the old Betsy McCall's paper dolls of all those years ago.  After stitching a few of the outfits using light shades of the various colors as recommended for the embroideries, the project got bogged down, and frankly I was bored and disappointed in the way they looked.  Very pale and bland and (to me) just plain boring.

Then, inspiration struck, after reading a recent post from Barbara at Cat Patches blog, where she had colored in the background of an embroidered quilt block she is currently stitching.  With nothing to lose, and hoping to be inspired to complete this little project at last, I dug out the big box of crayons we keep around for grandchildren's visits, and began coloring a couple of the completed blocks. 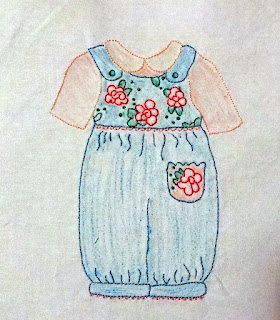 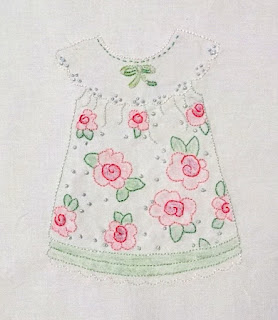 I liked this next red and white dress just the way it turned out and did not add any color to it. 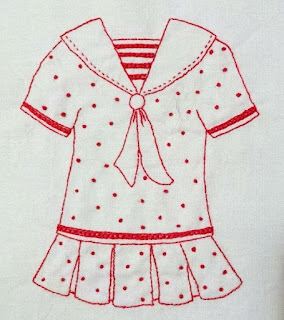 This is the block currently in progress.   There are four blocks remaining to be embroidered after this one is completed. 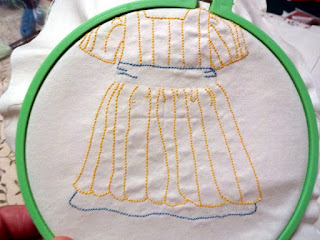 I think these will be my take-along handwork project while we're traveling.  Once the embroidered blocks are finished, it will be quick work to piece the sashings and borders from the remnants in the
scrap bins.  There's also a piece of vintage paper doll fabric found at a yard sale a couple years ago that I think will make a perfect backing. The entire quilt finishes at about 24 x 30 inches, just about perfect for a granddaughter to wrap up her dollies and teddy bears.

A couple days ago we harvested the first of the pie pumpkins.  The trees are beginning to show a bit of color along the creek bank behind the house.  The sunflower heads are heavy and drooping. Though it is hot this week, first frost in these parts can be expected any time after about September 12.  And now my favorite season of the year begins! 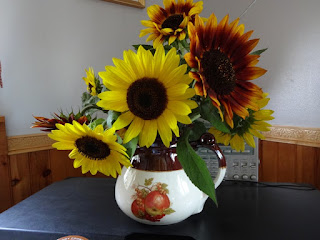 Speaking of favorites, here's a new favorite from our garden.  Lemon Boy.  Beautiful color, delectable almost citrusy flavor.  This one weighed in at a hefty 1-1/4 pounds!  We polished it off at supper last night (that's a luncheon size plate in the photo). 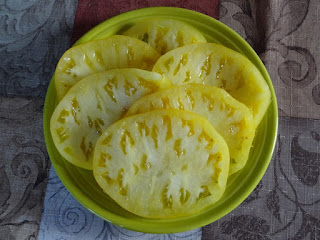 Posted by Quilting Babcia at 8:03 AM 6 comments:

Email ThisBlogThis!Share to TwitterShare to FacebookShare to Pinterest
Labels: Embroidered Projects, My Quilts

Lurching toward a new start

Ever since I first turned the page and saw this quilt in the Fall 2010 issue of Quilt Sampler, I knew it would be a "must make" on my never-ending list of future quilts. 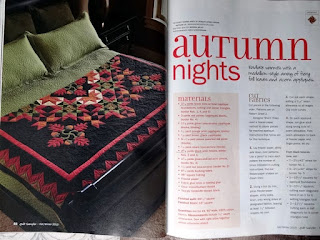 So, with an extended road trip coming up in the near future, last week I began cutting the applique pieces for the oak leaf/acorn blocks, hoping to accomplish some hand applique during the trip.  While attempting to fold back the edges over the freezer paper I quickly discovered the tight curves and acute angles were going to be w-a-a-a-y beyond my skill (or patience) level to hand stitch.  So, rather than going down in flames, the pieces were re-cut for some slow but steady machine applique when we return in a few weeks. 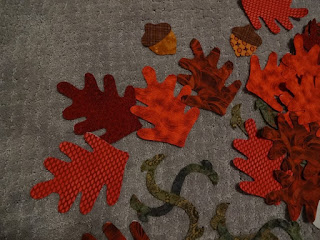 Since this quilt will eventually be for a very special person in my life, I didn't want to burn out on the project and let it turn into a UFO.  Better a little machine applique than a purist non-finish I say! Thinking the applique will be the most difficult part of the project, so that will be completed first, then the fun of piecing the remainder.  I'm hoping to hand quilt this beauty. 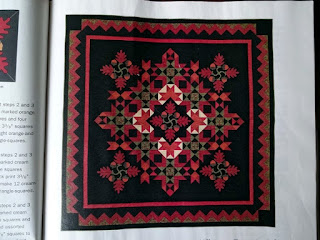 So, September begins with a new project.  Will it be finished by next September?  I certainly can hope, though the number of finishes this year has been abysmally few so far.  I do need to figure a way to rev up my hand quilting speed, that's for sure.

Now to find another hand work project for the trip.  Stay tuned.
Posted by Quilting Babcia at 4:47 AM 9 comments: