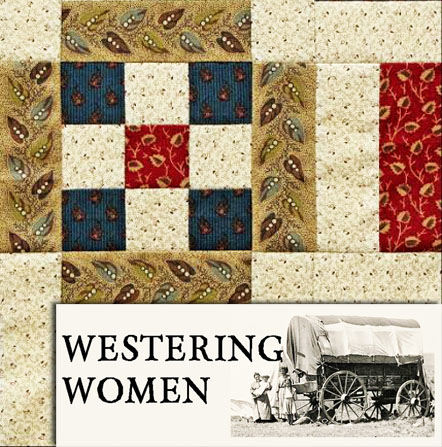 Have you heard about Barbara Brackman's new BOM on her Civil War Quilts blog?   This BOM will have a free pattern for one block per month during 2016, along with historical perspective of the women who traveled the various overland trails in the westward migration of the 19th century. Barbara provides some great links to biographies and diaries of the women who made this journey along with each month's block, and I for one can't wait to see this series unfold!  For many years my favorite reading material has been women's diaries and biographies covering the period from the American Revolution through early 20th century, including these three from my personal bookshelf:


Our first block was provided in Barbara's post yesterday, and is called Independence Square, commemorating Independence Missouri, the starting point for many on their westward journey.

One block per month I should be able to manage, so last night I foraged through my scraps and found some pieces that should work for this adventure.  Everything for this quilt will need to come from my scraps and stash, just as the pioneer women did, and like them, I can smile as I discover bits and pieces of quilts made for loved ones in past years, or pieces of fabric shared by friends far away.
Here is my block, completed this evening, slightly wonky, but I can always pretend it was stitched sitting by the evening campfire, can't I?! 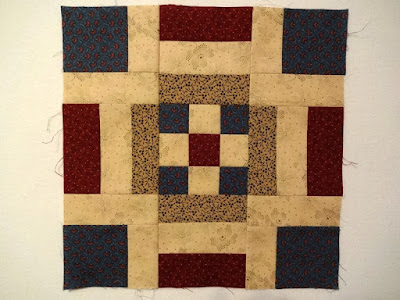 Are you planning to join the journey?
Posted by Quilting Babcia at 8:59 PM 11 comments:

A first finish for the new year,  completed on the young recipient's birthday, though we won't be seeing them for another couple weeks.  Made up of giant hexies - a first (and last) for this quilter as hexies have always been my least favorite quilt pattern.  This pattern looked doable and fairly quick, as it was made up of 2 1/2 inch strips and I had a jelly roll with some coordinating fabrics languishing in the stash. 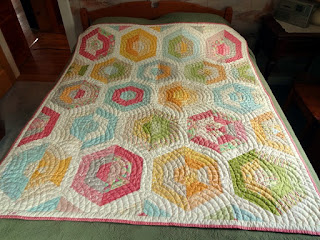 In retrospect, the jelly roll was made up of many colors and mostly tiny prints that read almost as a solid from a distance while the pattern quilt used only two colorways and large prints which would probably have been a better choice.  Still, this quilt is bright and cheerful, as well as soft and cuddly, and I hope will make the young recipient happy.  The pattern is from Fons & Porter's Love of Quilting, March-April 2015.

I used my largest Baptist fan stencil to mark the big-stitch quilting design, and used DMC #8 Pearl Cotton for most of the quilting.   This was a first attempt at big stitch quilting, so a lot of discoveries there - like stabbing my fingers a LOT more than has ever happened with traditional quilting!  The work does go faster though, which in this case worked out well since I wanted to have it completed in time to give it to her as part of her birthday gift.  And it just wasn't a quilt I would have wanted to spend months-on-end doing traditional hand quilting, nor did I want to machine quilt it.  The big-stitch quilting left the quilt soft and cuddly, and sweetly old-fashioned looking.   After washing the quilt finished at 58x68 inches. 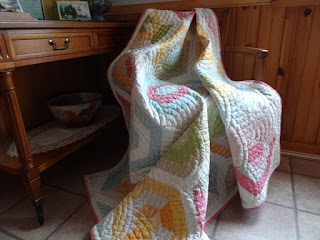 A couple weeks ago I was the lucky winner of a giveaway on Country Lady Quilts blog, and received this sweet packet of fabrics from Terry.  Thanks so much Terry, I'm thinking these will soon find their way into a baby quilt on the soon-to-be-started list. 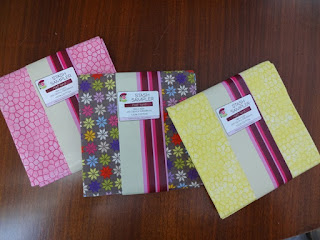 Our short January thaw is apparently over as it's snowing again this morning, however we have much to be thankful for as last weekend's nor'easter missed us entirely!   But much as I don't care for the cold and snow anymore, these days do afford more time in the sewing room and that, my friends, makes me VERY thankful! 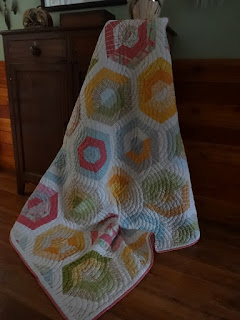 January is half over and it feels like I've been on a bit of a treadmill.  Mind you, there's no room for a treadmill in our little house, but trying to meet a fast-approaching hand quilting deadline can sure feel like it!  Getting close to completing the big stitch quilting on the giant hexie quilt, then it'll be on to the binding and label for an end-of-the month birthday.  So looking forward to having this one completed and being able to get on to a new project.  No new photos since it basically looks just like this last one, only with more of the same ... 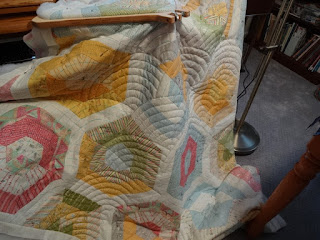 I'm continuing to love that bit of respite each day when I stitch up the next Quilty 365 circle.  Teresa of A Quilt and a Prayer blog recently commented on how much she liked one of the reindeer circles from December, so I sent her the small piece of that fabric that remained from the fat quarter .. as a bribe encouragement to start her own Quilty 365 project.  A few days later she gifted me with a piece of this fabulous winter bird fabric - I love it!  Thanks so much Teresa!  I've already used it for two of this month's circles, and I'm sure the remainder will find its way into another project or two. 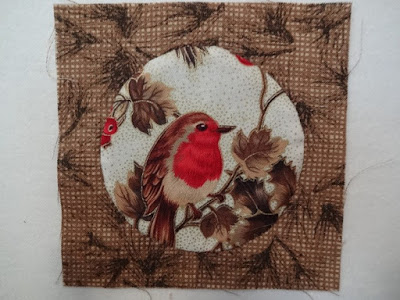 Hmm - not too good at keeping the camera angle straight on.   Anyhow, a few other favorites from this month's batch of quilty circles: 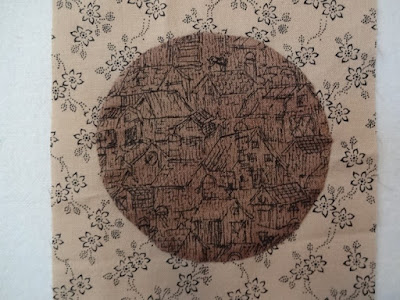 Have always loved these primitive house and barn sketches 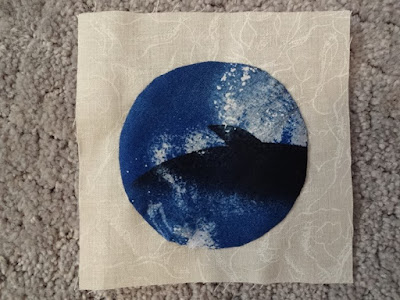 Memories of whale-watching trips along the Oregon coast 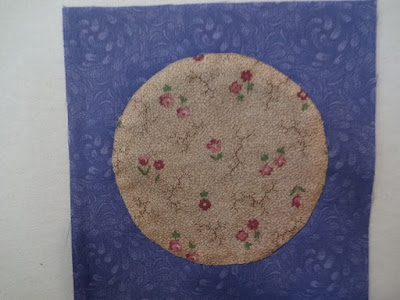 Trying out a few different colors for background squares

Back in December Anna at Woolie Mammoth blog held a 12 Days of Christmas giveaway, and I was one of the lucky winners - of this book filled with yummy recipes and quilts in all my favorite colors. Thanks Anna! 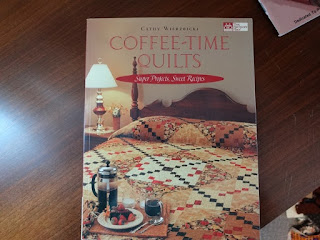 Signing off for now - with luck my next post will have a first 2016 finish.  One can always hope! 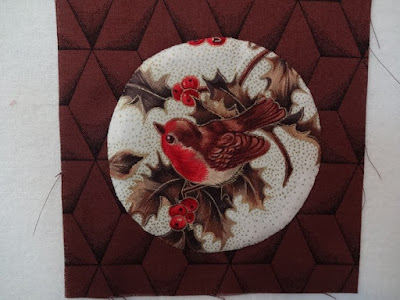 Email ThisBlogThis!Share to TwitterShare to FacebookShare to Pinterest
Labels: Quilty 365

It's a new year and time for our second link-up with Audrey's Quilty 365 Quiltalong. December was a decidedly frenetic month, and for awhile I was so bogged down that my little circles were piling up, nearly two weeks' worth, waiting their turn under the needle. Thankfully we're all caught up now, and here are my December circles (the one in the upper right is actually November 30 - forgot to remove it for the photo). 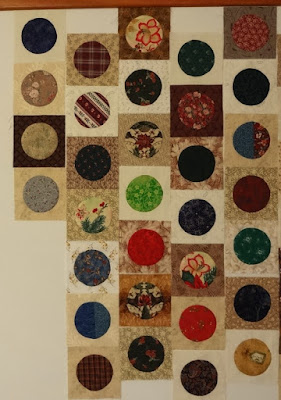 Debbie at Stitchin' Therapy had a great idea of offsetting the blocks rather than lining them up straight across, which I immediately borrowed for this photoshoot.  They seem to be more interesting this way, to my eye.   Here are all the circles I've completed so far, with the newest ones on the left, placed on the design wall vertically by weeks. I finally had to remove the spare basket blocks from the design wall since these babies are quickly taking over! 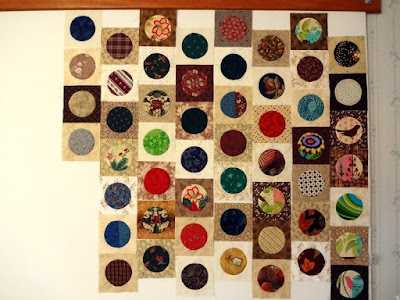 I began stitching circles on November 9, and there are 53 circles made through December 31.  Seems like I've been binging on dark circles so far ... will need to work harder at finding more light/bright fabrics to use.  That will probably occur naturally when spring arrives, don't you think? My circles are pretty much plain-Jane, especially compared with some of the more creative participants in this group.  It's been so much fun to see all the originality happening with this simple concept!  While I'd hoped to make the circles completely from the various scrap bags and bins, there are already a few instances where a somewhat larger piece of a favorite fabric has been cut into.  And there will definitely be repeats of the same fabric before all 366 or so are completed!

A few of my favorites from December: 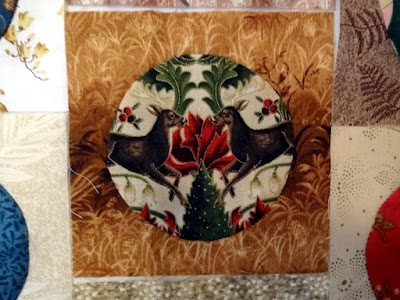 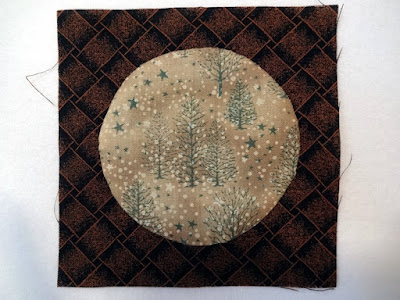 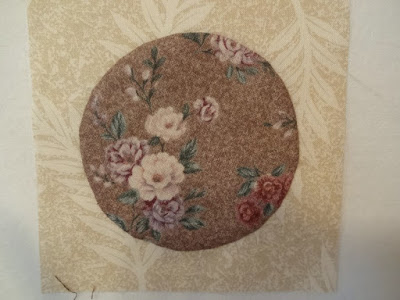 So, here's the thing - there's still time to join in the fun.  Several of my blogging friends have decided to begin on January 1, a great way to begin a new year.  That little bit of time every afternoon or evening with a hand stitching project is so relaxing!  After 50-plus circles I can see my needle-turn applique skills slowly improving, though there's obviously still room for much more improvement! You can check out some really creative takes on this project by heading over to Audrey's Quilty 365 linky party right here. 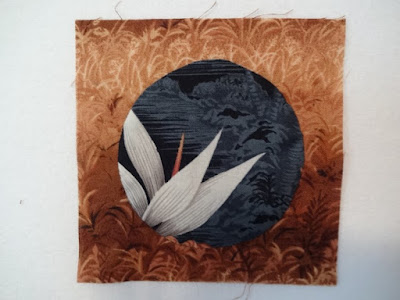