Design Wall Fun, or Give a Kid a Swiffer Box!

Three of the grandkids spent last weekend with us.  Much fun outside, playing in the creek, a treasure hunt in the woods with grandpa, badminton games, and lobbing tennis balls for the dog to fetch and return (not sure who had more fun on that last one).  Exhausted grandparents by Sunday afternoon!

A couple hours before they all departed, and after air mattresses were deflated so we could walk in the sewing room, the older two wanted to sew.  I gave the 8-year old granddaughter a partially completed wool embroidery to finish stitching, and gave the 11-year old boy a Swiffer box filled with triangle squares made from cutoffs from a quilt I completed last year.  A LOT of triangle squares.  Asked him to design a quilt block or two.  He pondered for a few minutes and then ... 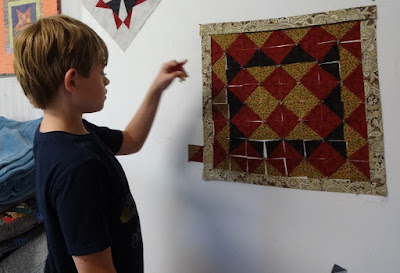 After completing this block he wanted a sashing strip and chose this leftover binding fabric.  Well OK!

And about half an hour later he ran out of design wall ... 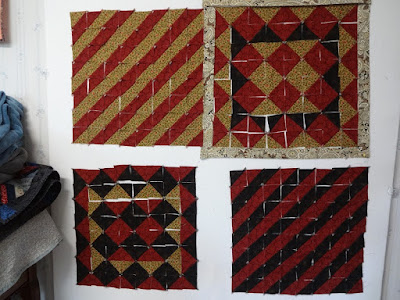 He ran out of room but not triangle squares!  He asked me if I would sew the blocks together and then send the quilt to him as soon as it was done.  Of course!   There was no time to get out the machine and have him begin the stitching since mom and dad wanted to get on the road right after lunch. I think there are enough squares for two more blocks.  We'll see if this spatially dyslexic granny can duplicate his design - or not.  We'll be seeing them again in a couple weeks when we deliver a small dressing table for the 8-year old's bedroom.  I'll take along a small tote of border fabric selections and let him choose what he wants.  The first block (64 squares) finished at about 14-1/2 inches.  It will be a smallish quilt, but he will love it since it's his own design.

And I'll have an empty swiffer box to fill with more HST squares!
Posted by Quilting Babcia at 8:25 PM 17 comments:

By a wing and a prayer, Joseph's Coat became a completed flimsy this afternoon.  It's my second string-along quilt top for Lori's (Humble Quilts) challenge this year, though the first one to reach the completed stage. 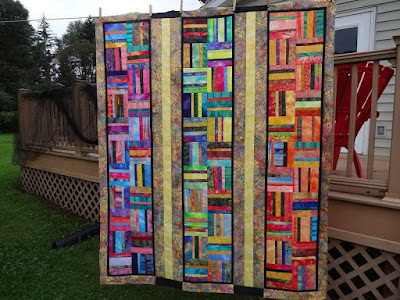 In my earlier posts I had toyed with the idea of adding the yellow batik fabric strips between the rail fence blocks, trying to bring the top to a useable throw size.  I loved the yellow alone, but by itself it just took over and somehow diminished the lovely bright effect of those wonderful batik rails.  Several kind readers suggested black for the alternating strips.  I loved the idea of narrow black batik strips to separate each section so added those.  But how to tame that yellow, or provide a viable substitute?

This top needed to come entirely from my scraps and stash. There is a medium tote stuffed with beautiful batiks, now mostly in strips and scraps since I've already completed two queen size quilts from that tote.  The possibilities with enough yardage were few: 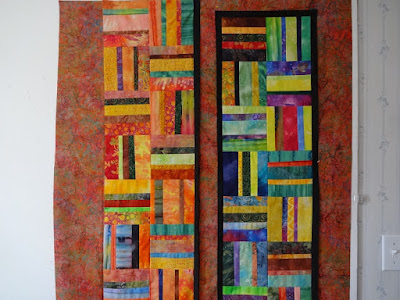 Loved this orange-red batik but not exactly what I had in mind. 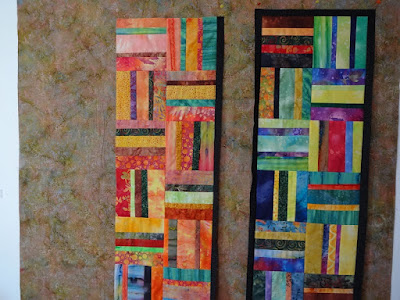 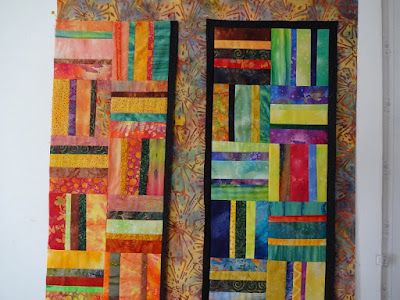 Yes!!  Of course this was the best choice ... the smallest piece of the bunch, with about 25" by WOF.  Could it work, at least for the wide sashing strips between the rail blocks?   Measuring once, twice, three or more times, trying it with a narrow strip of the yellow batik sandwiched between two strips had a nice effect I thought. 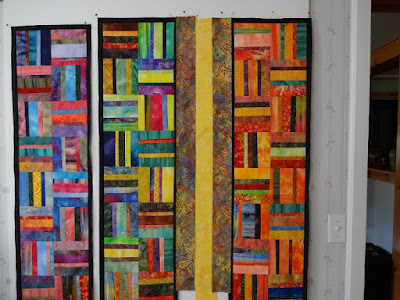 So that became the plan.  Strips cut, pieced together, and there was 10-1/2" of that precious batik leftover.  Now the dilemma became how could I make that 10-1/2" stretch into bordering the entire quilt?  Good question, and the answer finally turned out, I couldn't.  Those narrow black strips outlining the rail sections were cut from a little over one fat quarter, and I had the remainder of the second fat quarter left.  So, that plus the 10-1/2" of the other gold/blue/green batik were carefully cut into 2-1/8" strips.  Side borders got the gold/blue/green, and top and bottom were pieced to alternate the black with the gold, and finally a finished top measuring a healthy 55 x 66 inches. 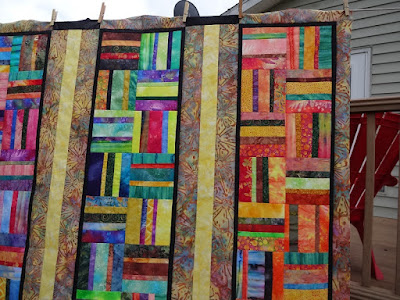 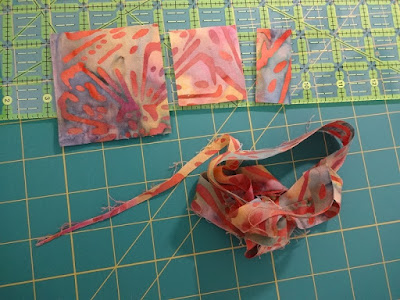 This morning the quilt's name Joseph's Coat came to mind, partly because of the strong vertical lines and many colors, and mostly because Dolly Parton's famous "Coat of Many Colors" kept playing in my mind.  Now to find a backing fabric, something a bit more subtle perhaps?

I'll be linking up with Wendy's Peacock Party and Lori's String-along Challenge. 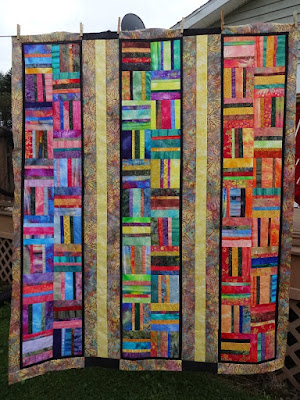 Til next time, happy quilting!
Posted by Quilting Babcia at 7:46 PM 16 comments:

"April in Paris" - an August Finish!

"April in Paris" is finally a finished quilt!  The last binding stitch was put in over the weekend, and I immediately whisked it outside for a photo shoot.   It was a windy afternoon. 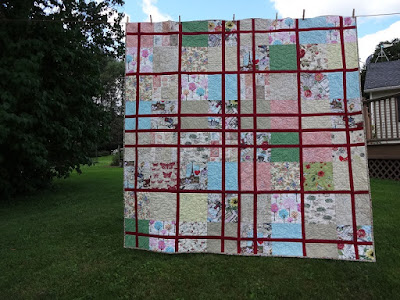 All these photos were taken before washing out the Crayola markers I used for tracing stencils and some freehand designs in the larger blocks.  I was pretty nervous about that first wash, partly because of the dark markers and also that bright claret used for the sashings.   A couple color-catchers in the pre-rinse came out bright blue-green, first thought to be from the markers, until I discovered the Printed Treasures label had been dyed the same blue-green. But no red bleed - whew!  After the pre-rinse in cold water I washed the quilt with a bit of laundry soap in cold water.  No bleed on anything except that label which seems to be permanently dyed.  It's the first time I've seen a Printed Treasures label take on dye like that.  Thinking now it must have been from the blue backing fabric, though that had been prewashed.  I'm just breathing a sigh of relief that the entire quilt didn't take on a blue hue. 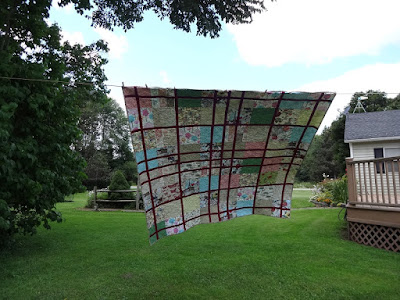 The dog run finally has a purpose though it took a 3-step ladder to reach the line! 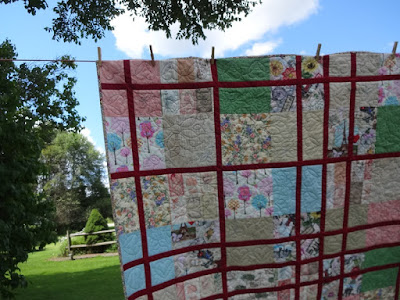 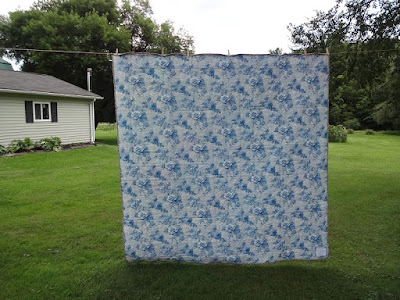 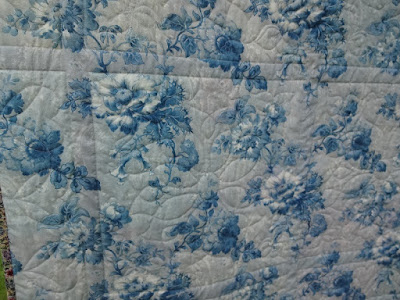 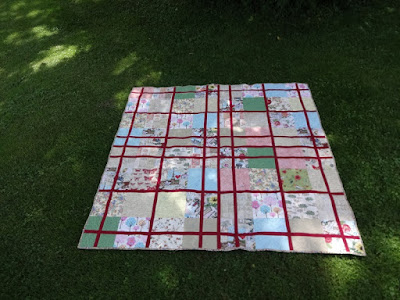 My faithful photo shoot assistant, who was polite enough to not roll on the quilt! 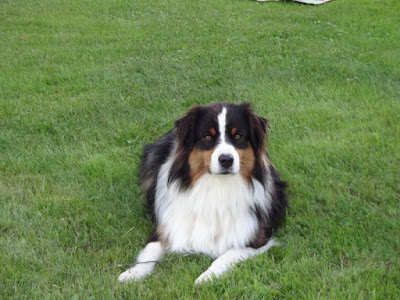 And a finished quilt post deserves a shot by one of my favorite trees out back! 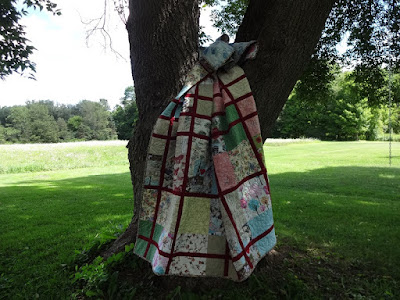 This quilt is based on a pattern by Tony Jacobson published in Fons & Porter's Love of Quilting.  My version's finished size after washing is 76 inches square. The quilt crinkled up nicely after quilting and its bath, though the shrinkage was far more than I'd expected.  The flimsy measured 80 inches square and I'd hoped it would remain close to the 80 inches, but I'm very pleased otherwise with how it turned out.  This quilt is destined for the benefit auction on August 31.

This was my One Monthly Goal for August and I'll be linking up with Patty at Elm Street Quilts here.

Til next time, happy stitching!  I see canning in my near future.  Tomatoes still green but the plants are heavy with fruit, with any luck we will see a huge harvest, some for us and some for sharing.

Already the summer months are nearing an end and with that brings the major garden harvest, and canning our favorite salsas, fresh tomatoes, tomato jam, and most especially tomato-basil pies for supper!

Also on August's agenda is completing April in Paris, my final donation quilt for this year's camp benefit auction.  This year's auction is on Aug. 31, so this quilt needs to be done and dusted by about the 28th of the month.

After what seemed an eternity of ditch quilting every single sashing seam, the FMQ is going reasonably well.  Here's what it looks like now.  (Can't post a picture of the full quilt on the floor as the dog is blowing his coat right now and it's impossible to keep up with the shedding even with daily sweeping and vacuuming!) I'm using stencils for the FMQ work because of the time constraints and they're just plain easier for me to do than attempt an all-over FMQ design.  Hearts in the small squares and rectangles, and a fun dahlia stencil in the large squares. 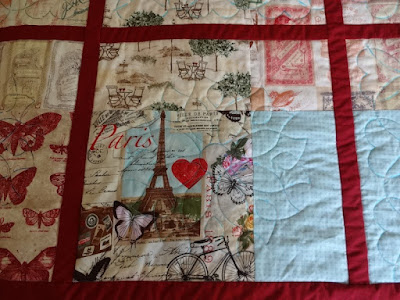 The stencil I had is just a bit too small for the size of these blocks, so I'll need to go in and add a small filler design in each corner.  Thinking of a simple Trillium leaf design for each corner.  Sixteen blocks, eight starts and stops for each to fill in those corners - looks like 64 additional thread ends to bury.  Thankfully there are some old movies I wouldn't mind watching on TV some evening while that gets done!

So, this is my one monthly goal for August, to wrap up this project and get it delivered to the camp in time for the auction.  Joining the Goal-setting Linkup for August at Patty's Elm Street Quilts.

Til next time, happy quilting!
Posted by Quilting Babcia at 9:12 AM 9 comments: