Over the Thanksgiving weekend I finished stitching down the binding on these two vintage panel quilts, destined for my son and daughter's families.    After all the years waiting in my Christmas fabric totes and who-knows-how-many years before I acquired them, they are finally about to go to their new homes! 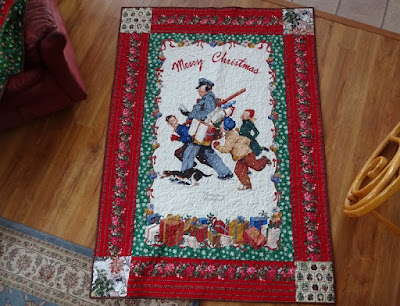 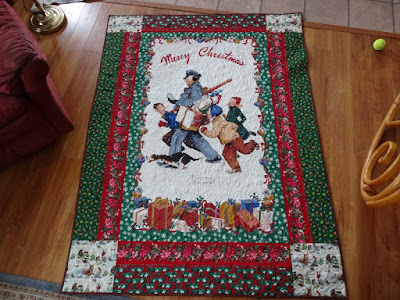 That vintage red poinsettia yardage had served as our 'tree skirt' for several years and has been washed and dried several times, but you know the story - it bled, just a little - into two of the corner blocks of the first quilt - sigh!  Thankfully though, there is absolutely no pink/red staining in either of the white panel backgrounds or the other corner blocks!

Two quick and easy gift quilts that ate up a lot of yardage that had been hanging around here for far too long.  Here is a close-up of the quilting and corner blocks for the green quilt. 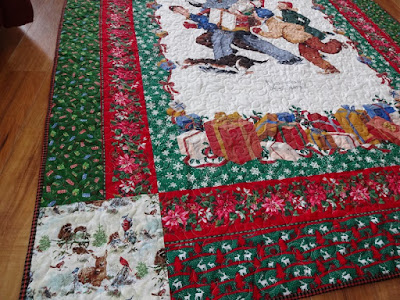 Working on a few more easy stitching projects for Christmas gifting.  Easy sewing is about all I can do until my appointment for new prescription glasses which will likely take another three weeks or so.
Posted by Quilting Babcia at 8:52 AM 16 comments:

Email ThisBlogThis!Share to TwitterShare to FacebookShare to Pinterest
Labels: 2018 Finishes

November OMG "Sajou" is a Finish!

Last week, between cataract surgeries, I finished the hand quilting and binding for Sajou, my Humble Quilts little quilt-along for this fall and my mini for November. 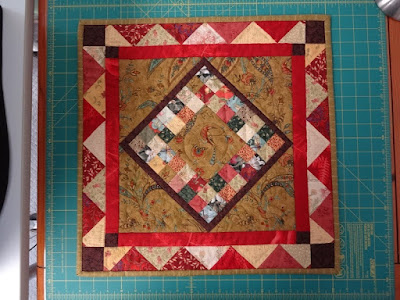 After attempting photos on a couple different gray days, this was the best I could do.  Hopefully the hand quilting will show up just a bit on at least one of these.  I did ditch quilt the major sashing and border seams by machine, and then hand quilted the rest. 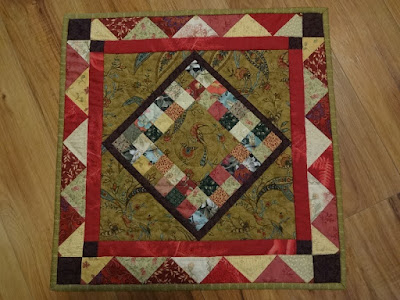 I'll be linking up with Elm Street Quilts One Monthly Goal - November Finish  when the linky party goes live at the end of the month.  Now to find a good place to display this little gem.   Thanks again Lori for a fun quilt-along! 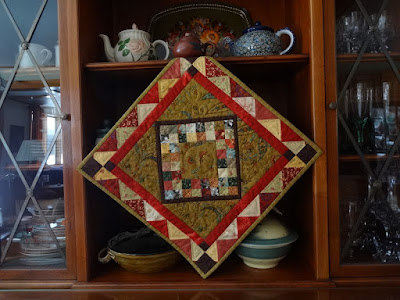 Email ThisBlogThis!Share to TwitterShare to FacebookShare to Pinterest
Labels: 2018 Finishes

I've seen dozens of tutorials for making totes, but had never tried my hand at making one, until this past weekend.  Andy at A Bright Corner posted about a cute little French Market Tote she had just finished, and provided a link for a tutorial she had previously posted.  This one looked very simple, no pockets, no zippers, no applied hardware of any kind, just the thing for a quick little project.

Sorting through fabric bins a couple weeks back I found two pieces of a rainwear type fabric, one in navy and the other a burgundy color, probably found at a long-ago yard sale.  I had no idea what I was going to do with them until I saw the tutorial for this tote.  Each had less than a yard left, but enough to meet the fabric requirements, and there was enough yardage of a blue print for the contrasting band, handles and lining.  This is the result. 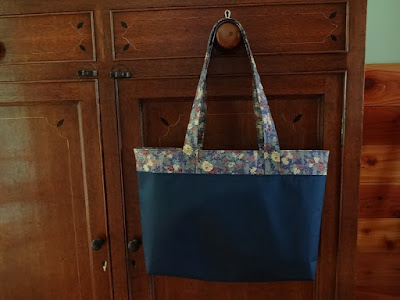 The only fusible interfacing available in our local store was quite lightweight.  Andy's tutorial recommended Pellon 809 which our store did not carry.  I think this bag is a bit lighter weight than I'd like, and I've ordered some of the recommended Pellon before proceeding to work with the burgundy fabric.  Although the instructions for the interfacing I did have recommended against using it on rainwear, it did work reasonably well, though a few small ripples appeared after the final pressing. 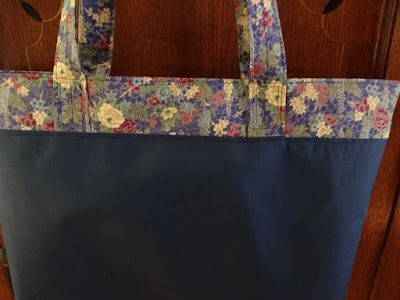 A closer look at the contrasting print.  Love that fabric!

Now I just need to find a piece of something stiff enough to line the bottom of the bag to provide a bit more stability.

Moving right along, the binding for Sajou just needs hand stitching on the back, the two Christmas quilts are awaiting their binding, hopefully tomorrow, and another holiday project is waiting in the wings.  Oh yes, the second cataract surgery is scheduled for Thursday, hopefully everything will go smoothly as the first one last week!

Our prayers for all those affected by the utter devastation happening in California this week. 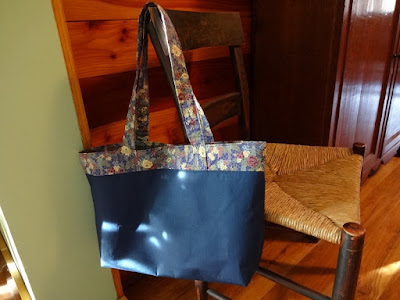 What I've Been Working On

About ten years ago, while I was still working, a retired teacher who regularly visited our office came by with some bags of 'sewing things.'  She was nearly 90 at the time and her daughter was insisting that she sell the family farm and move into smaller quarters in town.  Among the items she was giving away to any and all takers were two Norman Rockwell Christmas panels, which I happily accepted.

These vintage panels are much larger than those produced currently, measuring 35 inches by over 57 inches from selvedge to selvedge!  They were marked only "Wamsutta" and "Hallmark Cards."  I would love to know when they were produced but so far Google has revealed nothing.

Anyway, right from the time I received them I had planned to make Christmas quilts for my son and daughter's families.  This is the year that will hopefully become a reality!

So last week I found my bin of Christmas fabrics and went to work to add some borders and make the quilts a little larger than just panels, found a perfect backing fabric from among the flannels and set about quilting them.  Here is the first one, quilting complete and just needing binding attached along with a bunch of threads to tie off and bury. 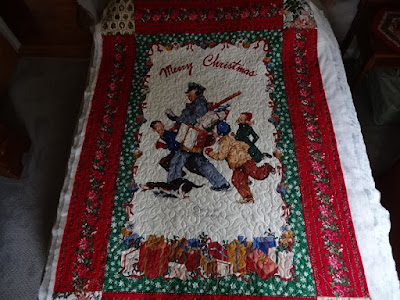 It was dark and gloomy when these photos were taken, in the one above the red border is more true to color than the left.

I used my go-to allover quilting motif, Wendy Sheppard's Jesters Hat to quilt these since doing anything more elaborate would push the finishes into next year.  The idea is to get them done, and gifted, move some stash out of the closet and off of my UFOs list - this year!   A couple close-ups of the quilting: 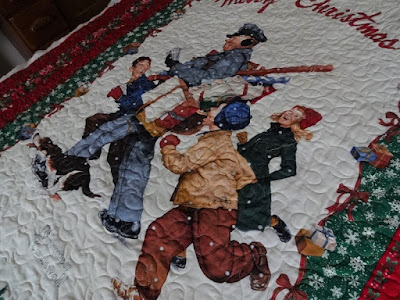 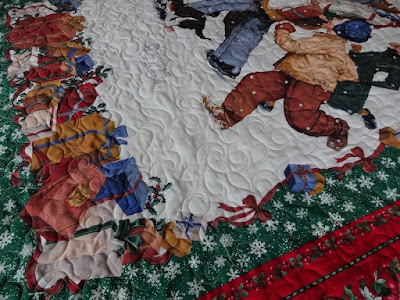 This first quilt top measured 73 x 51-1/2 inches before quilting.  And I'm loving this wonderful Thimbleberries flannel backing from 2006 - 6 whole yards sitting in the bottom of the bin, and just exactly enough to back both quilts!  It's so soft and plush, I know the grands will be fighting over who gets to wrap up in this quilt - good thing it's long enough to go over all three if they snuggle up on the couch! 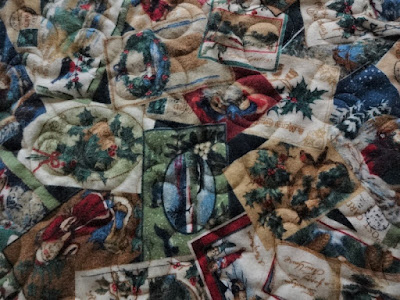 The second one, for my daughter's family, is well on the way, being about 75% quilted at this point.  It has a predominantly green border and different print cornerstones, but otherwise is very similar to this first one.   I'll be taking a break from quilting for a few days as the first cataract surgery is scheduled for tomorrow morning.  Hoping that the stitching hiatus is short-lived, cause I'm on a Christmas gift-making roll now and don't want to stop!
Posted by Quilting Babcia at 8:53 PM 8 comments: