Back in 2016 I made "Memories of Astoria", a special quilt for my husband who spent his early college years in that little town near the mouth of the Columbia River.  You can read more about the inspiration for creating this quilt here. 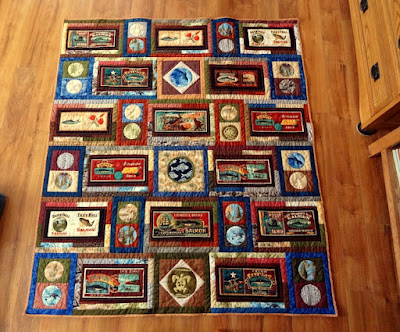 While making that quilt I made two versions of the "fish through the porthole" block.  The first one ended up being a little too large for the space so rather than ripping and cutting down the background an identical but smaller version was created for the quilt and the first became an orphan block.  While digging through a bin of fabrics last month I unearthed said orphan and decided this was the year it would become a finished mini quilt. 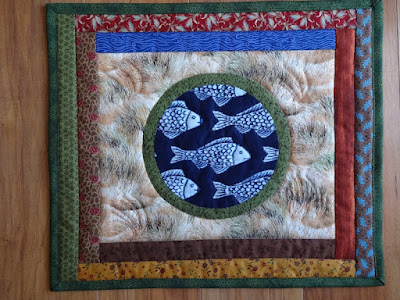 It was just a matter of adding another round of borders to bring the block to a placemat size.  The circles were hand appliqued, so I decided to hand quilt around each of the fish, then a bit of machine quilted clumps of beach grass and stitch in the ditch for the borders, and it is finally finished. 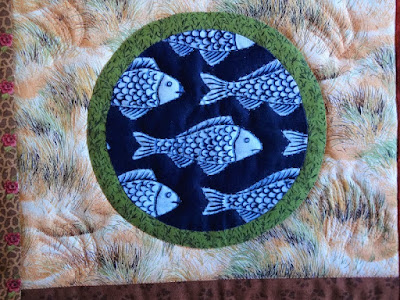 Some fresh-fallen snow on a sunny late afternoon provided another view in a different setting and light. 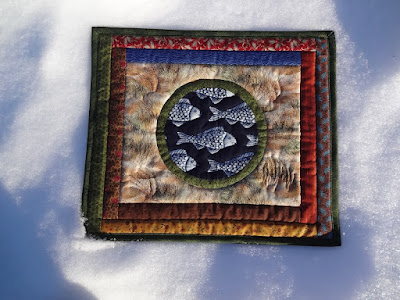 We're bracing for yet another snow-ice-freezing rain storm tomorrow.  It's been a wild-weather February with everything from record low to high temperatures, snowstorms, ice jams and major flooding, with a few sunny days to give us hope that spring will eventually arrive.  The first robins and red-wing blackbirds made an appearance yesterday.  I may go out and look for any sign of daffodils poking through the ground before tomorrow's snow covers them yet again.
Be sure to check out Wendy's (The Constant Quilter) post on the 28th for more February minis.
Til next time, happy stitching!

Today's snowstorm provided a perfect day to finish this donation quilt for the family who lost their home to a fire in early January.  Since we're not expecting sunny weather for at least a few days, some indoor photos will have to do. 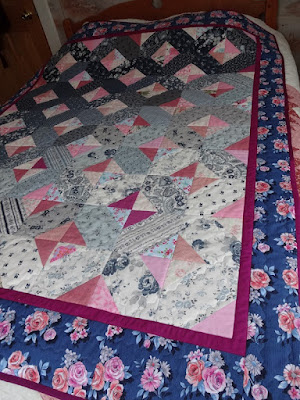 The quilt finished at about 59x74 inches, a good size for a single bed. 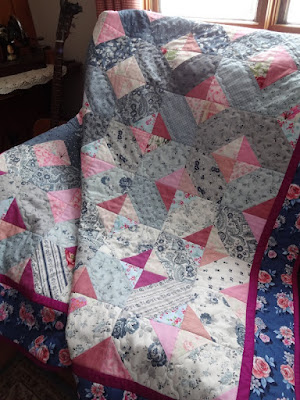 Machine quilted - stitch in the ditch and serpentine stitch throughout.  Hopefully you can see the quilting a bit better in the following photos. 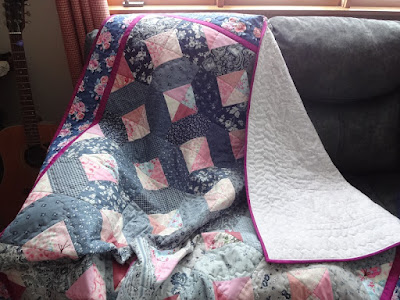 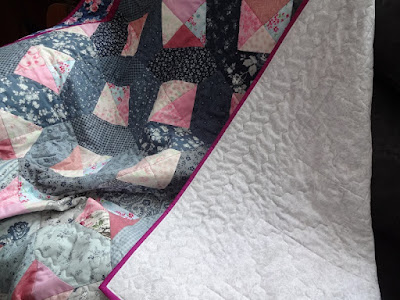 Though probably not visible in the photos, there was not enough of the stop border fabric to complete the binding, so I alternated strips of two similar solids to complete the quilt.
Since the snow is expected to continue through tomorrow, I'm going to allow myself a play date with a pile of orphan blocks, parts and pieces, and see if something develops into a quilt.  In between working on taxes that is.  Maybe February's mini quilt will take precedence, we'll see. 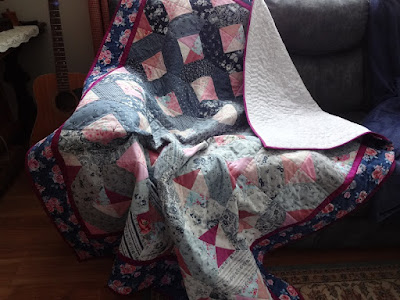 Til next time, wishing you sunny skies and happy quilting!