It seems last week's squirrel has morphed into a full-blown endeavor, worthy I think of naming it as my second String-along quilt.  And more likely to be finished by the end of Lori's String-along over at Humble Quilts!   When I last posted just a few blocks had been completed. 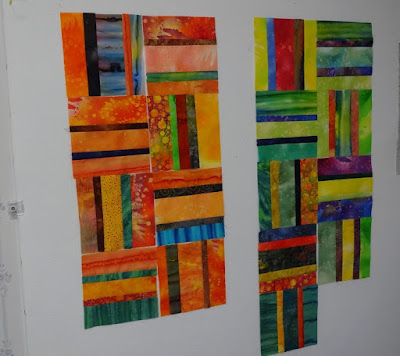 Over the weekend this happened.  Trying out some potential sashing and layout. 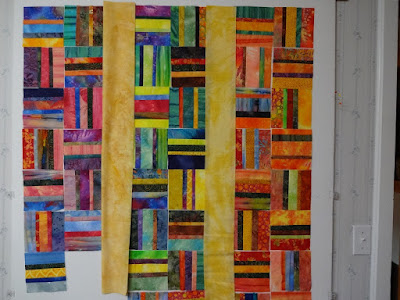 Though I like the idea of a pale yellow for sashing for these saturated blocks, I'm still constantly second-guessing myself.  The yellow pieces I currently pinned up on the design wall look way too dark I think. Several kind commenters on the last post have suggested black, which would add a bit of drama, though it might be too dark and somber for a 13-year-old girl.  I'd also thought of a deep purple, maybe?  What about three vertical rows of blocks then a row of sashing?

Or, another possibility, borrowing on the suggestions to use black sashing, maybe a narrow black strip between the rail blocks and the yellow sashing??  (The colors are more true in the following photo.) 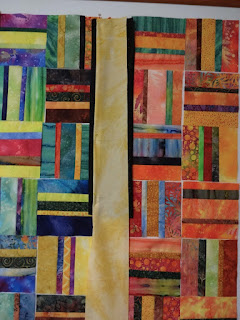 Can you tell design decisions are agonizingly difficult for this artistically challenged soul, especially with this array of bright in-your-face hues such as these.  Those same bright saturated batiks are energizing though, and so much fun to cut and stitch and lay each one next to the previous one!  I've probably stitched a little more than half the scraps on hand and plan to keep on until they're all pieced into blocks, then decide on a final layout.  You of course are invited to help!  Just leave me a comment on how you would take this jumble (jungle?) and create order from the chaos!  It's totally OK if you say you hate it, my husband took one look this afternoon and said "looks like scrambled eggs" ... though that was probably not what he was thinking, lol!  He's more of a green and brown guy.

Linking up with Lori's String-along at Humble Quilts.  Hoping to get back to my blue  strings (Sing the Blues Mama Lou) next month.  Not to mention my monthly mini for July which is still languishing somewhere in the design stage.


Posted by Quilting Babcia at 9:09 AM