For this month's mini I consulted this book for some inspiration 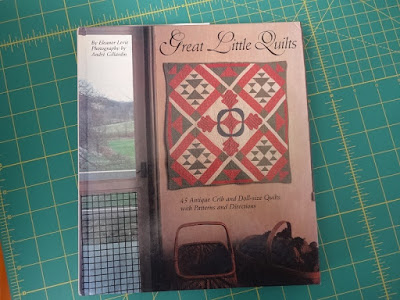 and came up with this gem, circa 1930, named Bulls-Eye Square. 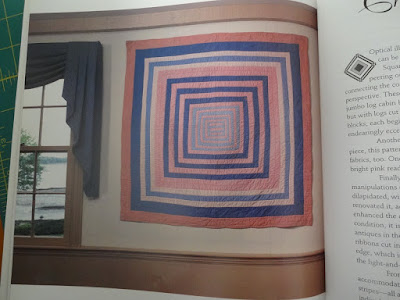 Shortly after I began piecing my version of the quilt in early June Barbara Brackman had a series of posts  Here and Here including both whole quilts called Housetops and block designs variously called Housetops, Pigpen, Hog pen, Chicken Coop and one variation known as Bird Trap.  It appears that both the inspiration quilt and mine may be a Bird Trap variation.
Last month our quilt ministry received a generous donation of fabric pieces from a faraway quilter who wished to remain anonymous.  Thinking this inspiration quilt might be a fun one to make in a larger size for donation, I decided to make a prototype mini using a couple of the donated fabric pieces and some other scraps from my stash.
There were directions in Eleanor Levie's book.  I didn't follow them. Just began cutting and piecing round and round.  For one thing I had no pink solid fabrics, and only a bit of blue solid so my version wouldn't be an accurate reproduction.  I only had very limited amounts of both the donated blue and pink fabrics for the central portion, and that gorgeous border print was also only a scant fat quarter.  Every strip was carefully cut to make the most of the limited amounts of those fabrics. The original inspiration quilt measured 44 inches square, my version is about 26x27 inches.  No problem, I love small table toppers! 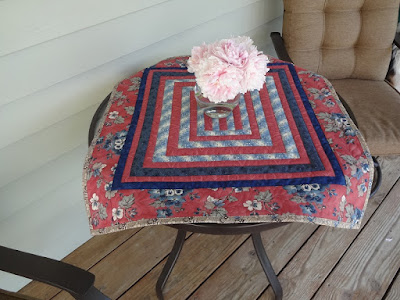 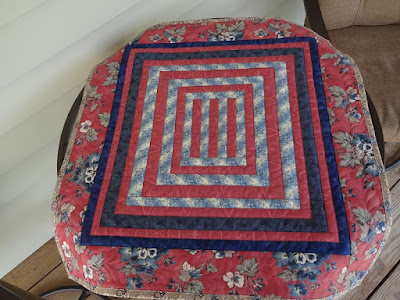 For the back I chose this gray and purple vintage feed sack, one of the two remaining in my stash. 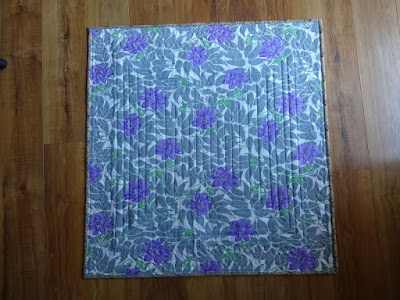 My version is ditch quilted around every seam, with freehand machine quilted feathers in the larger floral border.
This was much fun and a welcome diversion after dealing with Ruby for most of the month!
Be sure to check out Wendy's mini quilt roundup post on the last day of the month at The Constant Quilter.  There are some fabulous quilts featured every month! 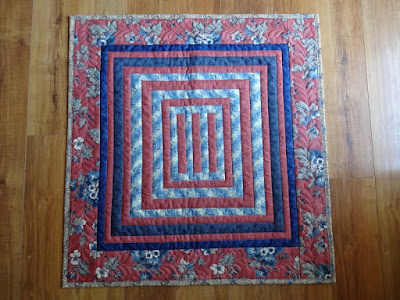 Posted by Quilting Babcia at 9:02 PM