It all began with a set of twelve leftover basket blocks from my French Country Strippy quilt of a year or two ago (from Fons & Porter's Fat Quarter Friendly book). 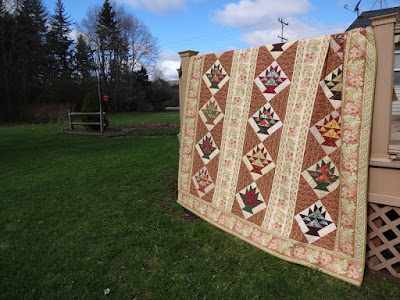 It's time to be thinking about donation quilts for the upcoming Labor Day church camp auction.  Basket quilts are good ones for this auction, so we set about finding something for the setting triangles that would coordinate with the baskets.  Hubby was convinced this tomato soup red was better than any of the other choices in my stash (mostly tan to brown prints).  Maybe, though it really began the long saga of finding something - anything - that would remotely go with ...  I had some border fabrics leftover from the previous quilt, and they really looked the best, but of course there was not enough.  Nor was there anything else in the stash that either had enough or even began to blend in with what was already on the design wall ... sigh.  This quilt was already angry, flat-out refusing anything I offered.
So, rather than pitching it into the waste basket next to the sewing machine I figured if nothing was going to play nicely why not introduce something new and that's where we ended up.  I grabbed a piece of this older "Kashmir Style" by Hoffman fabric and some blue solids and introduced them, the Kashmir has both red and blue, even if none of the basket blocks has a speck of blue, and we went with that.
A semi-sunny day a couple weeks ago, in an attempt to get a couple photos that would somewhat capture the colors and sheen of the beautiful border fabric.  You guessed it, the quilt refused to cooperate, exhibiting its continuing fury thusly. 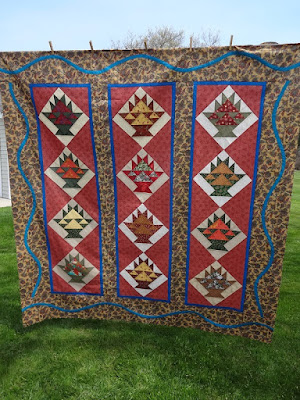 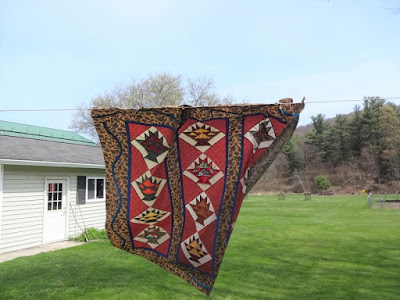 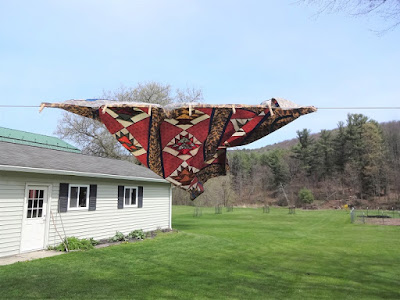 And of course the camera failed to pick up any of the gold highlights that make that border fabric so wonderful, even on the closer shots, which I won't bore you with.
While watching this little quilty temper tantrum, the perfect name came to me.  There's an old country song called Ruby, are you Mad at your Man.  And here it is, as sung by Rhiannon Giddens.  See if you agree.
https://www.youtube.com/watch?v=MV6Xs-0jmeQ
Ruby it is.  And I can't decide whether I love it or hate it.  Lukewarm is probably a better descriptor of my feelings at this point.
Posted by Quilting Babcia at 7:52 PM