This quilt began with a box of twelve orphan basket blocks, the rejects after my friend L completed her own quilt made from a kit of Barbara Brackman's Baltimore Blues.  My friend is a perfectionist and these blocks failed to pass muster for several reasons, basket points too close to the edge, a variety of finished sizes, not square, etc.  By themselves they looked pretty bland to my eyes, but the first thing on the agenda was to border them  and then trim them all to the same size.  But the overarching goal was to preserve as many of the basket points as possible in the process.  Believe me when I say there are a LOT of 1/8" seams in this quilt!

So, after a couple days, we had this.  Still a bit bland but getting better, thanks to enough scraps of that delightful blue floral to fussy cut cornerstones for the sashing. 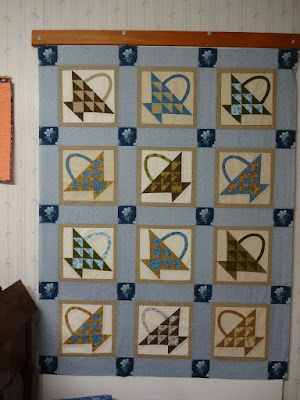 Last week while sorting through some bins of donated fabrics for our quilt ministry I found what to my eyes would be a perfect border to add more fun to this top.  Lucky for me there was one 18 inch wide strip about 76 inches long.  Enough for the side borders.  It just happened to be a drapery fabric from 1986 according to the selvedge, a bit heavier than quilting cotton, but perfectly serviceable. 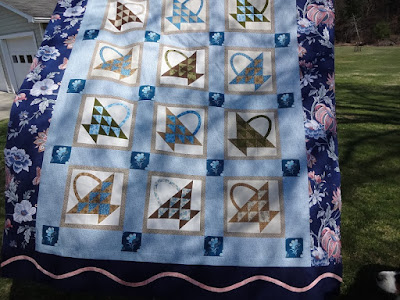 For top and bottom borders I tried out a serpentine strip of a similar peachy-pink on solid navy blue.  Really wanted to keep that peachy vibe going since it seemed to invigorate the entire quilt.  And tada, a finished top! 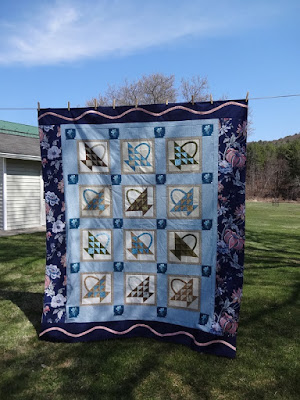 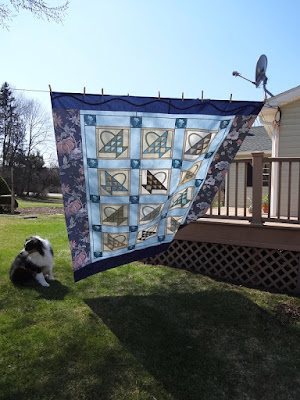 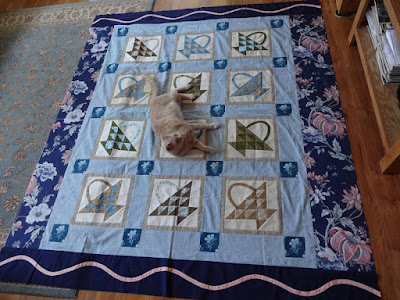 Kitten approved
Not sure what that streak is in the bottom center of these last photos, suspect it's just a shadow cast by a fold in the center.
I've been smitten with large-scale prints after using this one, actually there are a couple in my stash that have been waiting for years to be used.  I think their waiting days are about to end!
Hubby brought the little bistro table and two chairs out to the back porch, and this morning it was sunny and over 60 degrees out, warm enough to enjoy my first summer latte on the porch.  Just waiting now for the hummingbirds to return and the flowers to appear! 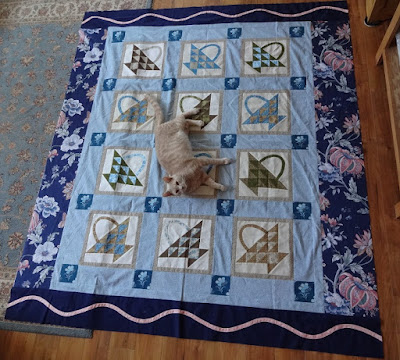 Posted by Quilting Babcia at 3:22 PM

Email ThisBlogThis!Share to TwitterShare to FacebookShare to Pinterest
Labels: Lady Sings the Blues