For awhile now I've been wanting to make my son a Japanese-themed quilt, since he has been interested in all things Japanese since he was in junior high school.  Not really too surprising, since his great aunt had served in the Army for many years stationed in post-war Japan.  During that time she became quite an accomplished potter and had been acquainted with and studied under at least one Japanese master potter there.  Another great uncle had studied the art of bonsai and his back yard was filled with examples of his work.  Both of these relatives are now deceased.  We had also hosted a Japanese exchange student during one of my son's high school years, and my son has also studied some of the martial arts and had a great interest in collecting some Japanese swords - at least until his children began arriving.

Anyway, I decided this would be the year to make at least a small wall quilt in time for his birthday early next year.  I was lucky enough to find a used copy of the book Quilting with Japanese Fabrics by the late Kitty Pippen and it has become a treasured resource. Actually becoming a bit dog-eared with repeated readings - so much to learn! 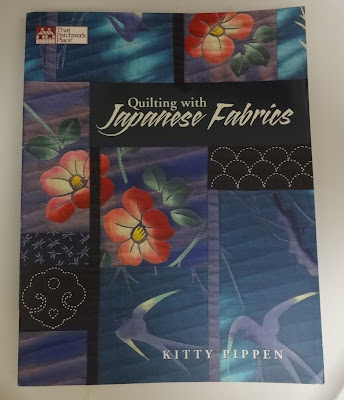 Filled with photographs of Mrs. Pippen's gorgeous quilts constructed of vintage Japanese fabrics, topics covered include elements of Japanese design, descriptions of the types of fabrics produced in Japan and the long arduous process of indigo dying, traditional  sashiko designs, along with several detailed projects.  At this point probably my very favorite quilting book.

Last night I began drafting a fairly simple (I hope) design for this first quilt.  For the past few months I've been collecting some small pieces of Japanese yukata and other fabrics.  Here is the initial selection of potential fabrics for a small wall quilt (subject to further editing of course!). 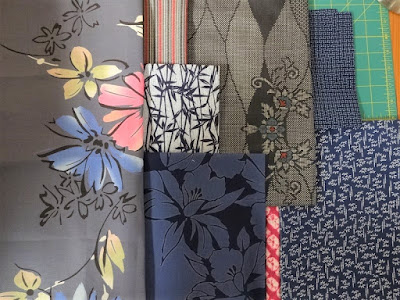 And, to make things even sweeter, Saturday's mail delivery contained an envelope from Japan.  Cynthia of Wabi-sabi Quilts sent along these two sweet pieces of fabric, one a classic chrysanthemum print and the second a piece of blue tenugui with a fishing net design.  Thank you Cynthia!  The blue tenugui will be a beautiful accent fabric for this first quilt.  I plan to save the chrysanthemum fabric for another future project. 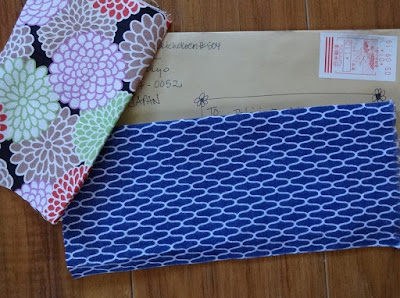 Til next time, enjoy this first day of fall!
Posted by Quilting Babcia at 7:39 AM