Around and Around in Circles

Circles everywhere!  Four days into Quilty 365 and so far keeping up. 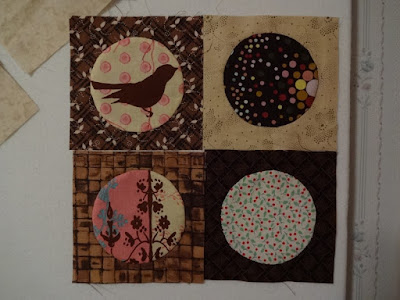 Quilty 365 - First Four!
Liking the pink and brown combos a lot, so there will be more of them scattered around this eventual quilt.  The pink and brown designs are from an old partial panel from a scrap bag of yard sale fabrics.
And, I know there will soon be days when no sewing is accomplished, so I've cut a few circles ahead from a couple different scraps and have them pinned on the design wall ready and waiting for any opportunity to work on them. 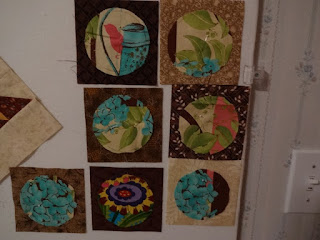 Next batch of circles to be appliqued
The key to success in this project for me is going to be to not get very far behind.

And, I lied.  I said there would be no additional photos of The Blockade quilt until it is finished. After hand quilting on this queen size monster over the summer, the blocks are finally all quilted; and as I laid it out on the cutting table to repin the borders, couldn't resist a few photos. 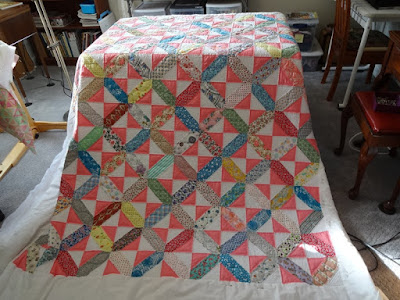 My retro quilt - The Blockade
The quilt top was purchased several years ago on eBay, it came from the estate of an Ohio Mennonite lady who was a prolific quilter in her time.  This top came with the border quilting designs already pencilled onto the white muslin.  The blocks were made with a mix of mid-century fabrics, with a few older pieces likely from the 1930s or early 1940s.
I was able to complete one hoopful of the border design last evening. 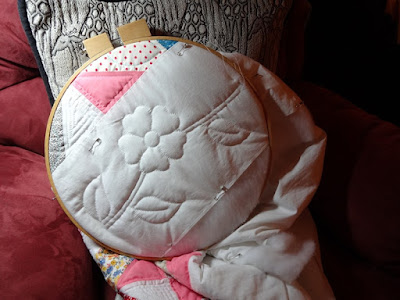 Hoping I can get by with just quilting the border as drawn and that it won't demand additional background quilting.  I'm using Hobbs Polydown batting which according to one source can be quilted as far apart as six inches.  None of the spaces are that large, so we'll just have to make a judgment call after all the border design is quilted.  We're in need of an additional quilt on the guest bed for winter and I'd like to have this one completed before the Christmas holidays if possible.  And there's white stuff falling from the sky intermittently with possible accumulation later tonight, so an extra quilt is going to be very welcome, very soon!
Posted by Quilting Babcia at 3:22 PM