I finally finished hand quilting the Red and Lights log cabin quilt a week or so ago, and completed stitching down the binding over the weekend.  Here's how it looked by evening lamp light about five minutes after the last stitch was taken.  A little late for Christmas but just in time for Valentines Day, with exactly one Christmas fabric and a few light pinks (more on that later).  My goal is to have four Christmas/winter quilts for the holiday season,  This is number three and the gray/red squares top from my last December post will be the fourth. 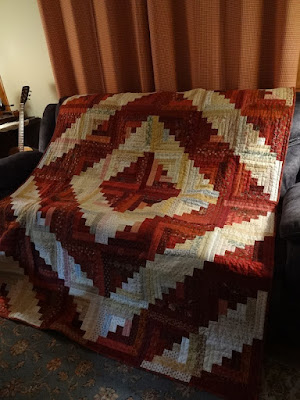 We finally had a sunny afternoon yesterday after several days of gray foggy rain and wind, followed by snow. 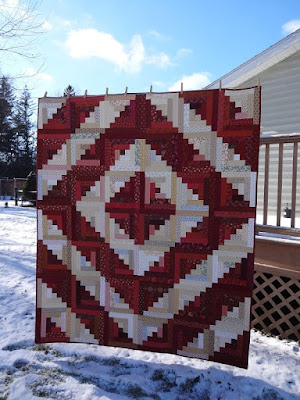 Not too much snow as you can see and it was beginning to melt where the sun shone on the lawn.  Our dog loves snow, running along and scooping it up on his tongue every few steps, then rolling in it and generally having a great time. 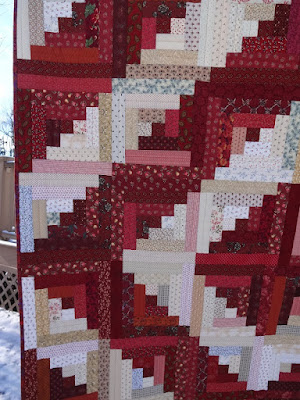 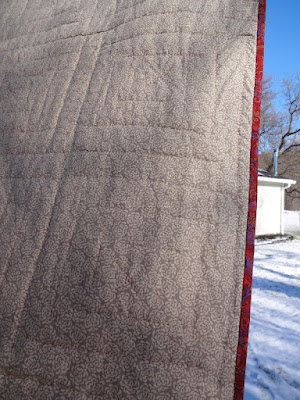 After getting a few more shots and walking Gibbs around the yard, the quilt came back inside for its first bath and fluff in the dryer.  Hmm, even using Synthrapol and several color catchers, a few of the "white" prints came back a pale pink, thankfully uniformly, but pink nonetheless!  I had used scraps from a number of sources, some of which probably had never been prewashed. Interestingly, some of the whites remained totally unchanged.  So, rather than calling it my red and white quilt (actually some of the whites were creams and light tans to begin with), the new name is Red and Lights.
After washing while finishing drying on the bed: 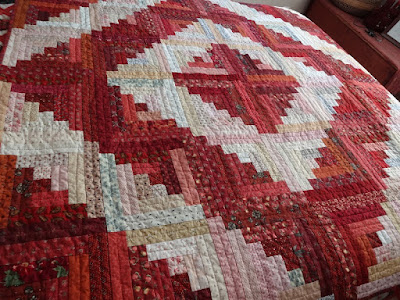 The hand quilting made it soft and snuggly, perfect for one of the grandchildren when they stay over on Christmas Eve next time.  It shrunk up a bit after washing, now measuring 62x71 inches. 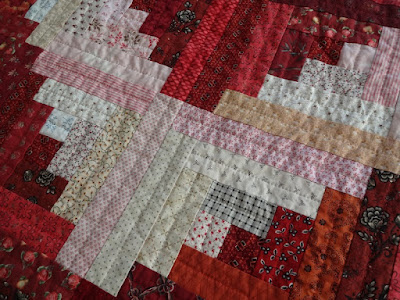 I've fallen behind with blogging, reading others' posts and especially commenting over the past few weeks. We are settling in to a new normal after our beloved pastor was laid to rest on Friday, after serving our little country church and the surrounding communities for over forty years.  Last week was spent preparing for the several hundred friends and extended family expected for the funeral. Hearing nearly 200 people lifting their voices in unison in songs of faith and hope was almost beyond description.  We are blessed to be a part of this community of faith.
Til next time, stitch with joy and cherish every day! 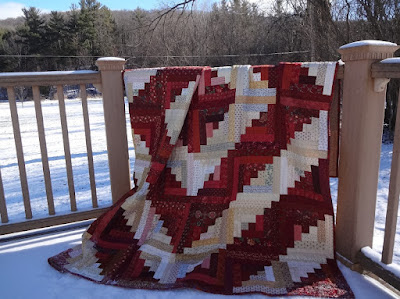 Posted by Quilting Babcia at 7:43 AM

I think that lovely mix of soft reds and neutrals would be great year-round! Congratulations on a fine finish.

What a beautiful quilt, Pat! Because you used a few pinks to begin with, it's hard to tell that the reds bled into the lights. Looking at this makes me think about making one myself.

I'm so sorry to hear about your pastor. Forty years is a long time and I'm sure he formed great relationships with everyone in the congregation, which means he will be greatly missed.

It's a beauty! And the newly "pinked" light fabrics do nothing to detract from that.
Sounds like your pastor was well-loved, and the memorial service lifted hearts, in spite of the mourning.

Your first finish is a beautiful way to begin a new year. Your Red and Light log cabin is really lovely. Losing a Shepard is hard after so many years.

How beautiful, I love the soft lights esp the pinks. Do you mean all the fabrics that are pink in the finished quilt were once white or cream. Hmm let me go back to see the first unwashed version.

Your snowy scenery is so lovely.

Congratulations on this wonderful finish. I love it! If you want more snow for Gibbs, just say when and I'll ship you some ... for free! Lol. Do you know that a drop or two of Dawn dish soap can remove all those red stains? Ask me how I know. https://atthecornerofscrapandquilts.blogspot.com/2017/01/hidden-gems-seasons-finale.html
;^)

Your quilt is simply glorious! I'm so very impressed that you hand quilted it. I love that it's full of scrappy goodness that even turned a little pink. Certainly that's understandable. I love knowing that your grandies will sleep under it. Curious as to why you need four quilts... for four grandies to sleep under when they visit over the holidays? Your outdoor pictures are the best! Little did I know, until moving to Florida, that the best pictures are taken outdoors on a clothesline, and in the winter when the light reflects off the snow. Perfect photography conditions! My sympathies about your beloved pastor, but such a blessing to lift him in glory with 200 others.

Your Christmas log cabin quilts have always inspired me, and the latest one is no exception. I'm so impressed that you hand quilted it. The thought of all that hand quilting makes my wrists hurt! :-)

What a fabulous first finish! Love those reds. I think I see a "red" quilt in my future, just hope the ambition kicks in soon! Happy 2023!!

What a wonderful way to start the New Year. Your quilt looks so warm and cuddly and I love that it's hand-quilted! Those reds!! I've had my share of them, too!

Your log cabin quilt is so beautiful! I've had the pink issue as well, but on a quilt with an eagle- wasn't very regal! Let me know if you'd like any hints to getting the pink out.
So sorry about the loss of your pastor. Ours was at our church for about that long, as well. Blessings

It's a beautiful quilt! I would have thought the pinkish additions were deliberate - what a happy accident.